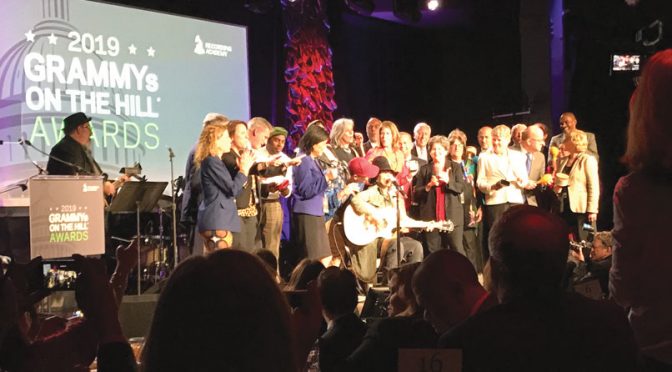 In addition to a full day of lobbying on Capitol Hill, the 2019 Grammys on the Hill Awards hosted more than 200 artist/creator advocates and more than 20 members of Congress who pledged their support for the work and fair treatment of artists.

Grammy award-winning gospel singer Yolanda Adams received the Academy’s Creators Leadership Award for her extensive advocacy work. Speaker of the House Nancy Pelosi (D-CA) stepped in for award winner Senator Chuck Grassley (R-IA) and headlined the legislators. Grammys on the Hill award recipient Hakeem Jeffries (D-NY) addressed those gathered during the dinner celebration. He spoke about his crucial work in Congress helping to pass the Music Modernization Act last year, as well as his ongoing work in the House Judiciary on behalf of performer and creator rights.

As is tradition during the annual Grammys on the Hill Awards, members of Congress gathered on stage to clearly make their presence known and raise their voices in song. Singer-songwriter Linda Perry of Local 6 (San Francisco, CA) led this year’s congressional singalong. She encouraged the 20 members of Congress to gather on stage and take solos.

Grammys on the Hill is one of several national springtime advocacy gatherings that the AFM is involved in and supports. Artists, many of whom are AFM members, lobby their members of Congress. Our monetary contribution for the special evening event is combined with those of many others to support the Grammy Museum. The museum hosts thousands of visitors each year, promoting music in the schools and encouraging all to join our efforts to bring music, one of America’s most cherished exports, to the rest of the world.

The Recording Academy, led by Neil Portnow, is a dynamic driving force for artist creators. The organization, along with the AFM, is an active member of the musicFIRST Coalition. Last year, the coalition lobbied for passage of the Music Modernization Act. It is currently fighting in Congress for a performance right in terrestrial radio. The AFM congratulates the Recording Academy for its diligent work on behalf of all creators.