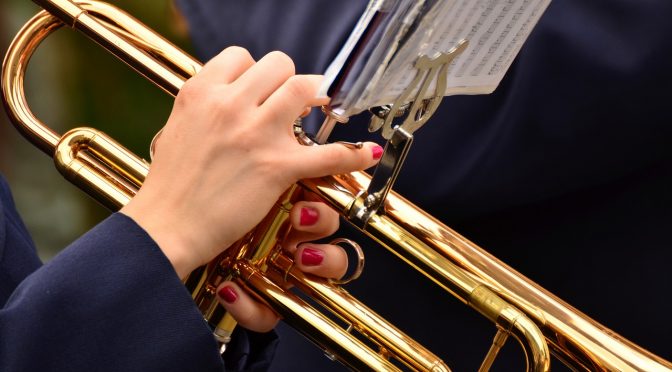 In seventh grade, I discovered the horn and found my musical voice. The camaraderie of the boys in the brass section felt comfortable to my tomboy nature. Being a girl didn’t seem a drawback to playing the horn, but my mouth full of braces sure did. Not until adulthood would I realize that the ever-changing female body could profoundly affect brass playing.

The distinctive physicality of female brass musicians became increasingly evident to me the more I interacted with my freelance peers. A hornist sitting next to me on an orchestra gig wet her pants going for a fortissimo high note. She was eight months pregnant, and the core abdominal pressure she engaged to nail the part pushed down onto the baby and her vulnerable bladder. The members of our entirely female horn section had no experience with pregnancy; our collective awkwardness compounded our colleague’s embarrassment. A female trumpeter shared that she took a pill to suppress her monthly periods. The side effects of the medication were worth it, she proclaimed, because she was determined to banish cramps, low energy from bleeding, and time changing pads from her commitment to keep the grueling schedule of her beloved drum corps. I, along with others, have hidden side effects from breast cancer treatments on jobs, driven to go “on with the show” for fear of looking weak and losing work.

In the fall of 2018, I launched the Brass Bodies Study to explore more thoroughly how female brass musicians experience changes to their playing due to catalysts affecting their physical functionality. Collaborating with sociologist Patricia Maddox, PhD, we designed a survey and an interview guide for gathering data to help us describe and understand the experiences of female brass players. Over 500 qualified participants completed the survey. At this writing, we are finishing our telephone interviews of 50 survey participants who volunteered to provide additional, in-depth information. The data we have collected so far is stunningly revealing for all that has been overlooked in research and practice regarding the occupational well-being of female brass musicians.

Gender informs a spectrum of physical and psycho-social attributes that have, to date, not been documented as distinctly female perspectives on playing a brass instrument. Our study findings seek to broaden the profile of brass playing to include considerations that have been dismissed as either irrelevant or deviating from a persistent, masculine-grounded narrative of this instrument family. Our data suggests that female-embodied experiences offer new understanding of how stamina, flexibility, creativity, adaptive response, and resilience factor into playing a brass instrument.

The survey for the Brass Bodies Study queried participants about changes to their brass playing from several different catalysts, beginning with female life-cycle events: menstruation, pregnancy, childbirth, and menopause. Most who reported changes in playing from these catalysts ranked their effects on brass playing as moderate, with some ranking the change as severe to debilitating. The survey also asked whether they received any supportive help from a teacher/mentor, peer, or friend.

Study participants who reported changes to their brass playing from menstruation often described a temporary decrease in physical stamina. Some reported that cramping pain diminished their breath support, while others noted a temporary decrease in mental focus. For some, periods changed the way the mouthpiece felt against their lips. Few participants received help for adjusting to these monthly changes. They didn’t reach out; they felt embarrassed; they didn’t want to be perceived as slacking. Periods for these brass players were an annoyance to be ignored and contained.

At a presentation of this data to the International Women’s Brass Conference, I asked how many in the room had a particular remedy to alleviate period symptoms. Several raised their hands. However, many of those hands lowered when I asked whether they ever shared these remedies with a peer. One participant remarked that she would “never ever” divulge to her male teacher that menstruation affected her trombone playing. Isolation thus continues to stigmatize menstruation.

Pregnancy and childbirth, two other life-cycle events explored through the Brass Bodies Study, also affected participants. A tubist who’d given birth to twins reported that her diaphragmatic strength ebbed to nearly nothing by full-term. A hornist had to figure out new posture and breathing regimens to accommodate pelvic prolapse, a postpartum condition that occurs frequently from multiple births. Pregnant brass players often reported struggling with bladder control during standard union rehearsal schedules and having to negotiate the carriage and weight of their instrument.

Similar to the catalyst of menstruation, these participants received virtually no support from others in adapting to the changes in their bodies. They figured out for themselves how to manage with less air, less energy, less coordination, less time. Out of these seeming restrictions, however, came new insights into more efficient breathing, more creative use of limited practice time, and a heightened sense of pragmatism.

Functionality on the emotional and mental planes certainly influences the physical. Thus, the study asked whether participants experienced changes to their brass playing due to issues of gender inequity, particularly sexual abuse and harassment. Exactly half of the study participants described their workplaces as having equitable gender representation. However, studies show that hostilities can emerge in environments where traditionally hegemonic cohorts (i.e. all-male brass sections) are diversified by members from different population groups. A hostile workplace, understandably, can undermine a musician’s optimum physical functionality.

For study participants who reported changes to their brass playing due to sexual harassment and abuse, the prevailing symptom of their distress was a dramatic change in breath intake and support (shallow breathing), as well as diminished concentration. Feeling abandoned by peers or isolated as a target for discrimination, some study participants described a physical sense of pulling inward affecting their playing.

We’ve been sharing data from the Brass Bodies Study, notably in two published articles describing our survey data. I recently shared selected interview data at a conference of the Performing Arts Medicine Association, as part of feature a panel, “#MeToo In the Teaching Studio.” Performance psychologist and author Patrick Gannon, percussionist and author Patti Niemi, Longy School of Music president Karen Zorn, and I addressed the topic from our areas of expertise, discussing systemic facets of sexual harassment and abuse within music institutions. Our collaboration sought to promote continued dialogue on making music safe and equitable for all.

There is no single experience of “female-ness.” The study data suggests this can be an asset, indicative of a thriving diversity of experiences informing musical practice. Female brass players embody—literally—a collective wealth of resources on adapting to change. They are uniquely poised to lead initiatives that build strong, inclusive models of health and well-being in the brass world.