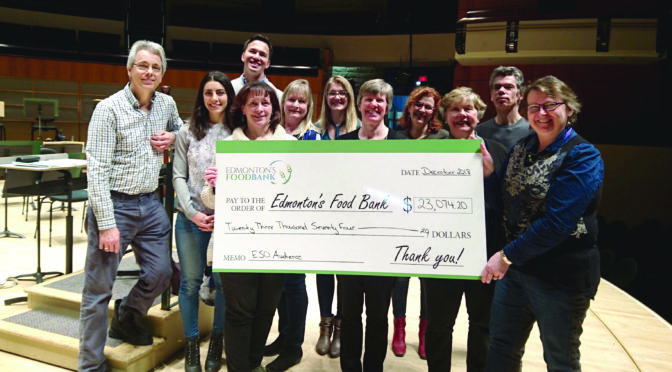 For the past 10 years, during intermissions in their December festive season concerts, members of the Edmonton Symphony Players Association go into the lobby to solicit monetary contributions to the Edmonton Food Bank from audience members. Their efforts have resulted in more than $182,000 in contributions.

“For many years the musicians of the Edmonton Symphony Orchestra donated to the food bank as a group,” explains Edmonton Symphony Orchestra Violinist and orchestra committee Chair Susan Flook. “In order to increase their contribution, they decided to ask audience members to give during Christmas concerts. The players don their Santa hats and go out to the lobby at intermission to ask for cash donations.”

“If a symphony orchestra expects the support of a community, it must be relevant in more ways than artistically and culturally,” says Local 390 (Edmonton, AB) President Eddy Bayens. “There is the impact on the local economy, the effective promotion of the city and the province, the educational and social perspectives, as well as the concern about those who, for one reason or other, rely on social assistance.”

“The response from patrons has been enthusiastically generous,” says Flook. “The economy of Alberta has had many ups and downs recently and the musicians are glad to have played their part in helping their community.”