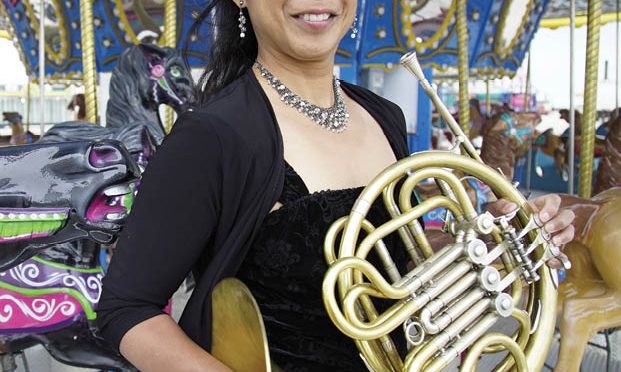 Like every orchestra in North America, the Winnipeg Symphony Orchestra (WSO) was forced to cancel performances as a result of the COVID-19 pandemic. This left Canadian horn player Michiko Singh of Local 190 (Winnipeg, MB), a WSO member, with time on her hands.

She was astounded to recently discover that she is the only rostered female BIPOC (Black, Indigenous, Person of Color) brass player in any orchestra in Canada. The new knowledge brought with it some mixed feelings. “On one hand, I didn’t want to be known as the token anything,” Singh states. “I want to be known for my horn playing. But the knowledge did impart a feeling of responsibility.”

Such responsibility also has its basis in Singh’s family roots: her Japanese Canadian mother grew up in internment camps and her Trinidadian father was a descendant of indentured servants from India. “I guess you could say I know about inequity.”

Singh’s father passed away when she was 7. She and her brother were raised by their mother in rural British Columbia. Singh started playing piano at age 5. “There were not a lot of opportunities,” she says. “No library, and we didn’t own a piano. I practiced on the school piano after classes.” Her mom couldn’t afford piano lessons, but in grade 8 Singh enrolled in band classes in public school. After trying out a bunch of instruments, she picked the horn “because it was supposedly the hardest.”

At the end of 9th grade, her mother got a job teaching on a reservation in Northern Saskatchewan. “I wasn’t going to live where there was no band program,” she says. “So, my mom arranged for me to move to Vancouver so I could go to school there.” Singh was 15 at the time. Horn studies in Vancouver eventually led to a scholarship at the Juilliard School in New York, where she received her bachelor’s and master’s degrees in music performance.

“I never made a conscious decision to become a professional musician,” she muses. “It was mostly me being a musician from the start but figuring out how to make a living at it along the way. Luckily, I never had people telling me I shouldn’t do it.”

Singh racked up an impressive list of work experience with orchestras including the Hong Kong Philharmonic, Vancouver Symphony Orchestra, Memphis Symphony, and a host of music festivals around the world. She also won first prize in the 2003 Solo Horn Competition at the International Women’s Brass Conference. Prior to her current position in the WSO, she spent 11 years with the Honolulu Symphony (now the Hawaii Symphony Orchestra). She came back to Canada as a single mother in 2010. Her son, now 11, plays the tuba. Singh says her life is a medley between motherhood, music, and martial arts.

“My son and I practice shotokan karate and kendo. I have to attend extra practices when he’s in school to keep up with him. I’m always worried about getting punched in the chops in karate, but I wear full armor in kendo, so it’s not as insane,” she says.

Repatriation to Canada was an eye-opener in many ways. “The Manitoba winters have obviously been a bit of a challenge,” Singh laughs. “In Hawaii, I lived seven minutes from the concert hall and rode my bike there. I got immersed in local Hawaiian culture and learned Polynesian dance. As there is a large Asian, mixed-race population there, I felt like I really fit in. Winnipeg has been not only a climate shock, but a cultural one. The WSO is a predominantly white organization. I’m usually the only dark-skinned person in any given space, at any given time. This gives me a completely different perspective from others in the organization,” she says.

Singh has taken steps to turn that perspective into a benefit, both for the WSO and the union. She believes there are areas where both organizations can improve. With that goal in mind, she got herself elected to the WSO’s Inclusion, Diversity, Equity and Accessibility (IDEA) committee.

“Orchestras, in general, are sometimes considered an elitist art form. We looked at the WSO’s subscriber base and compared it to the local phone book. We clearly did not engage with specific demographics in the city,” she says. The IDEA committee will ideally target a different community of interest each season to grow our reach. This year, it’s Filipino youth on the city’s North side. “We get to know this group, their fears, what they’re most proud of and who their influencers are. For example, it turns out they will rent out the orchestra hall privately for a graduation but will not come to hear the WSO at the same venue. Getting to know them gives us ideas on how to form lasting, symbiotic relationships with them. We will learn how to be relevant to them and they in turn will want to get and stay involved with us.”

Singh hopes to participate with Orchestras Canada in DEI work. She is a teaching artist in Sistema Winnipeg, an after-school music program under the WSO umbrella. She finds working at Sistema fulfilling in an entirely different way from performing in the orchestra.

Singh points out, even after getting a seat at the table, it’s one thing to come up with ideas that will provide equity—but then you have to get everyone on board to follow through on policies. Not everybody with power to make meaningful change will want to give up their authority or benefits. It is not easy to dismantle systems because of this. She recalls when the WSO hired an indigenous artist to perform with the orchestra at Carnegie Hall. “She told me she hoped she didn’t get sick, or she wouldn’t be paid. Some musicians have no union representation simply because they are not aware of the benefits they would enjoy from membership. Locals need to do more to reach out to marginalized voices and ensure membership still benefits niche musicians who might not be represented by collective bargaining agreements.”

She is currently exploring what groups in the US are doing with diversity initiatives. “For example, the Sphinx Organization has been hugely beneficial in the US, but we don’t have anything equivalent to it in Canada,” Singh says. “I’m hoping we can create a Sphinx equivalent here that’s specific to our country.” Singh understands there is a long road ahead. “It feels like Canadian orchestras are 50 years behind in equity work, but people are gradually seeing the necessity.”