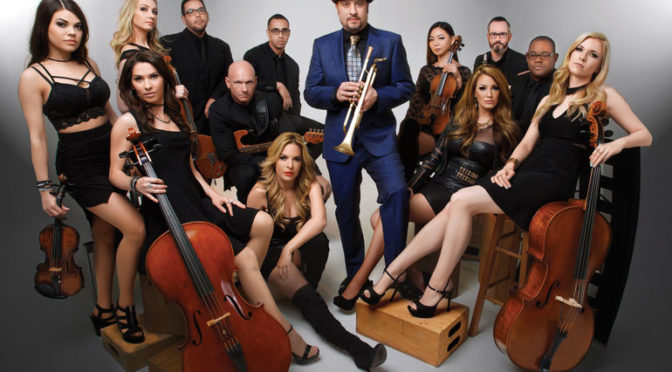 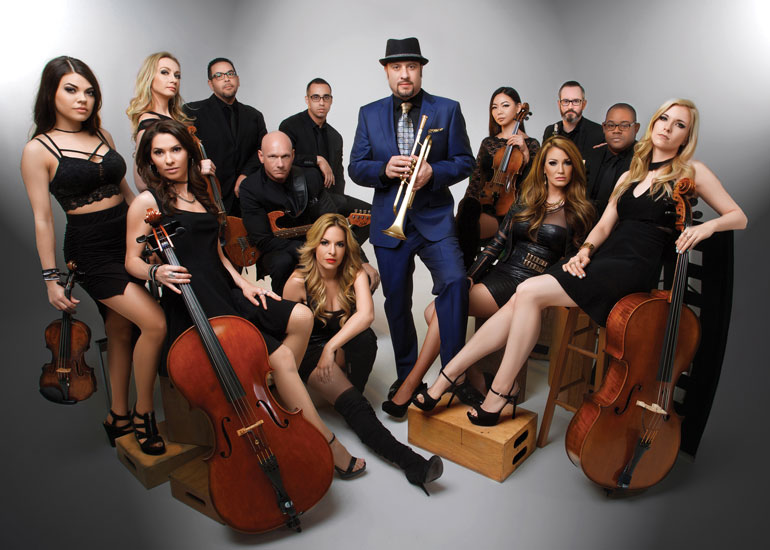 In a town where entrée can tax the most driven of performers, award-winning “Best of Las Vegas” trumpeter and producer David Perrico of Local 369 (Las Vegas, NV) has not only succeeded, but a few years ago he expanded his shows to include the Pop Strings Orchestra, his third band that actively plays along the Strip.

The show’s set list is filled with contemporary and classic hits, arranged by Perrico and performed by a 14-piece band featuring an all-female, seven-piece acoustic string section. The highly stylized ensemble mixes Perrico’s unique arrangements of pop and club rock, Latin, jazz, and R&B. “I tend not to go with formulas; I love writing for strings. The power of the strings—they can play nonstop. Strings have such major endurance; they can read anything,” he says.

The key, Perrico says, is finding the best players. Through years of performing he has gained plenty of access. Perrico was one of the original members of Donny and Marie’s band when they set up at the Flamingo in 2008. He’s backed Natalie Cole, Gladys Knight, and Toni Braxton. His pops band is filled with all-stars who play in the headlining shows of Andrea Bocelli, Carlos Santana of Local 6 (San Francisco, CA), Rod Stewart, Martina McBride, and Céline Dion.

His other band, The Rat Pack Is Back, plays six nights at Tuscany Suites’ Copa Room and on the weekend, he’s at Caesars with the Pops Strings. It can be a grueling schedule, but Perrico thrives on it. “It’s what I’ve always wanted to do,” he says. “I never intended to do it all. It happened by accident.”

The entertainment director at Red Rock Hotel saw Rat Pack when it debuted at Tuscany. It was a side project with some originals, jazz strings, and chamber music. She had an opening for a lounge act at Red Rock on Saturday nights. Though he didn’t have lounge music, Perrico quickly came up with 12 to 13 arrangements. From there, it took off.

After seeing a series of clips from Pop Strings shows at Caesars, Paul Shaffer of Local 802 (New York City) hired Perrico to build a band. Earlier this year, he performed with and served as music director for Paul Shaffer & The Shaf-Shifters shows at Cleopatra’s Barge.

“You must have something unique to offer because the city is always changing. It can be fickle. One minute something is working, the next minute, it’ll change. For me, it meant creating a niche that’s unique,” says Perrico.

Pop Strings is essentially a dance band, but Perrico says they treat it like an old style show, hearkening back to Louie Prima and Keely Smith. “I take music that DJs play here that’s popular and I’ll do medleys—for instance, a Bruno Mars medley. Snippets of songs that people know. I arrange them—Eagles, AC/DC, or Bon Jovi—and I’ll open it up in a jazz tradition where the strings players play improvised solos.”

Where Pop Strings is the club/lounge show, Perrico’s Pop Evolution, formed in 2012, is a big band that plays the Stratosphere, the Palms, and The Smith Center for the Performing Arts. “I’ve always liked the esthetic of the big band—and the impact,” he says.

Perrico began playing trumpet when he was nine years old. “My mom and dad always had music playing in the house, whether it was Chuck Mangione [of Local 66 (Rochester, NY) and 802] or Al Jarreau, Charlie Parker, Dizzy Gillespie, David Sanborn—and a lot of rock,” says Perrico. “My grandmother, Carmella, always made me cassette tapes of albums she had of Harry James, Tommy Dorsey, and Glenn Miller. So, I was listening to big band music at an early age.”

Perrico attended Youngstown State University in Ohio and was offered a graduate assistantship in jazz studies at UNLV by David Loeb of Local 47 (Los Angeles, CA) and 369, which led to a six-year teaching stint and a master’s in composition and film scoring. His days as a member of the touring Tommy Dorsey Orchestra from 1994-2001, rising to lead trumpet player and road manager, helped him prepare for industry challenges. “I spent 10 years on the road with the Tommy Dorsey Orchestra, doing 45 weeks a year. Road experience is real-world experience. It’s what you need to learn,” he says.

As a music director who is hired for a variety of shows, Perrico has become somewhat of an expert at managing contracts, which he negotiates through the union. Whenever he receives a contract for events, for instance, he hands it over to the union, he says he knows “everything will be taken care of. The pay is right—everything is going to be right.”