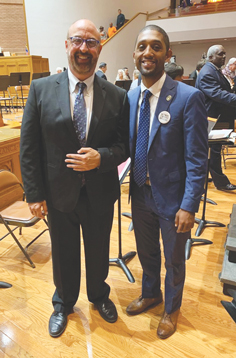 Details of the agreement were not available at press time, but were released at a joint press event on the afternoon of September 23.

The deal will end the 14-week work stoppage of musicians by the BSO, during which orchestra musicians have been locked out of their concert halls and have not received a paycheck.

“Baltimore Symphony Musicians and Local 40-543 are grateful to all of our AFM sisters and brothers who through their verbal and financial support helped us reach this agreement,” said Local 40-543 Secretary-Treasurer Mary C. Plaine in a statement. “It is good to know we can count on our colleagues as we continue our fight to preserve and grow the artistic legacy of the BSO.”

In an email to orchestra members, BSO CEO Peter Kjome stated, “This has been an extraordinarily challenging time for our organization, and for you most of all. It would be impossible to express how difficult this summer has been, and how meaningful it will be for you to return to the stage. The year ahead will be a pivotal one for the BSO. I believe that one of the most important aspects of the agreement is the commitment to including members of the orchestra in additional aspects of planning, programming, fundraising, and governance. While we have much work to do to strengthen our organization, we know that we can achieve far greater success by working together.”

The Baltimore Symphony Musicians have been picketing in front of the Joseph Meyerhoff Symphony Hall since mid-June and had said they would not return to work until they had a ratified agreement in place.

As negotiations between musicians and management have been ongoing, the most recent development—prior to the September 20 tentative proposal—was a September 9 “final” take-it-or-leave-it offer from management to its musicians. The BSO asked the orchestra to vote on the proposal, which contained an Option No. 1 and an Option No. 2—both options were rejected overwhelmingly by the musicians.

Federal mediators proposed an extension of negotiations until close of business on September 12, which management rejected. Musicians then suggested an extension until the close of voting, but management rejected that proposal as well. The proposal was presented to the orchestra Tuesday evening, September 10, and the vote was taken electronically.

Under Option No. 1, the musicians, members of Local 40-543, would be paid for 40 weeks of work, which has been the employer’s goal since bargaining began. The employer proposed an incomprehensible Rube Goldberg-combination of stipend and donor money to pay the musicians for 12 weeks of non-work. This “bonus” would require the musicians to waive their seniority and over-scale payments for the 12 weeks of non-work. The employer would also agree to hire up to six musicians; when the orchestra does return to work, there will be only 75 full-time musicians under contract, in violation of the 83 mandated by the latest expired CBA, and the 98 that was required before the BSO started extracting round after round of cuts from the orchestra many years ago.

In addition, the BSO wanted to eliminate all guaranteed relief services. They wanted the musicians to agree to participate in the new Integrated Media Agreement, but they planned for the musicians to underwrite that expense. And the employer wanted to initiate yet another joint workgroup, a “vision committee,” which would be a new standing committee of the board.

Option No. 2 was simply an extension of the expired agreement through December 31, 2019, which would have gotten the musicians back on stage with no guarantee that they wouldn’t be locked out again on January 1, 2020.

The employer “lifted” its lockout on the evening of September 9. The union filed an unfair labor practice charge with the National Labor Relations Board on September 10, in part charging the BSO with failure to bargain in good faith and unlawfully locking out the musicians to put in place the employer’s unilateral implementation of their 40 work-week proposal without reaching an impasse.

The Baltimore Symphony Musicians negotiated in good faith throughout the summer during the lockout. They, along with important community leaders, organized prominent donors to assist in this process, donors who have brought over $1 million designated specifically for musician compensation to help secure a contract.

The musicians have maintained they would continue the fight to preserve their 103-year-old institution, which serves the city of Baltimore, the surrounding counties, and the state of Maryland, and that they have always been ready and willing to go back to the negotiating table to achieve an agreement that would enable them to continue to attract and retain the highest quality musicians to perform for their audiences.