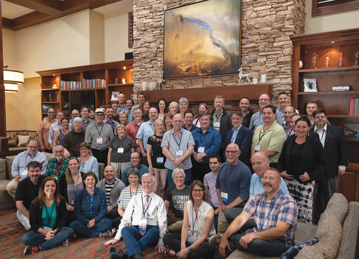 The International Conference of Symphony and Opera Musicians (ICSOM) headed to the mountains to hold its 57th Conference, hosted by the musicians of the Utah Symphony and Local 104 (Salt Lake City, UT), from August 20–24, at the Sheraton Park City Hotel. As usual, there were many issues of importance on the agenda, but delegates were offered multiple opportunities in breakouts and town hall meetings during the conference to hold open dialog with other delegates and the ICSOM Governing Board.

Wednesday afternoon included a new installment of Orchestra Projects of Note, which this time included Minnesota Orchestra’s South Africa Tour, the Oregon Symphony’s Lullaby Project, the New York Philharmonic’s “New York Stories: Threads of our City,” Hawai’i Symphony’s “Symphony of Hawaiian Birds,” Virginia Symphony musicians’ video interviews, and Pittsburgh Symphony musicians’ 412 Food Rescue project. Dr. Heather Malyuk, an audiologist with Soundcheck, spoke about a new hearing protection aid (and the next day, individual demonstrations were offered). ICSOM Counsel Kevin Case closed day one with a review of the past year’s negotiations and outcomes, which included the Chicago Symphony and Lyric Opera of Chicago strikes and the Baltimore Symphony Orchestra lockout. The mixer that evening, hosted by Local 104, allowed delegates and guests to enjoy the temperate mountain weather and toast marshmallows at the fire pit for s’mores.

The final day of the conference began with a moderated panel discussion addressing how to maintain unity and engagement in our orchestras. Greg Mulligan (Baltimore Symphony Orchestra), Kimberly Tichenor (Louisville Orchestra), Micah Howard (Pittsburgh Symphony Orchestra), and ICSOM Media Consultant Randy Whatley shared various stories and observations about efforts during and following work stoppages. During site selection, delegates chose the Pittsburgh Symphony to host in 2020 (August 19–22), the Milwaukee Symphony will host in 2021, and the 2022 conference, which will be the 60th anniversary of ICSOM, will be hosted by the Grand Rapids Symphony.

Resolutions offered support to the locked out Baltimore Symphony Orchestra musicians, urged all ICSOM members to support passage of the Butch Lewis Act in the US Senate, and thanked four musicians for their service to ICSOM: Kimberly Tichenor, who stepped down as member at large; ICSOM President Emeritus Brian Rood, who stepped down as chair of ICSOM’s Electronic Media Committee; and former Member at Large Matthew Comerford (Lyric Opera of Chicago) and ICSOM President Emeritus David Angus upon their retirements.