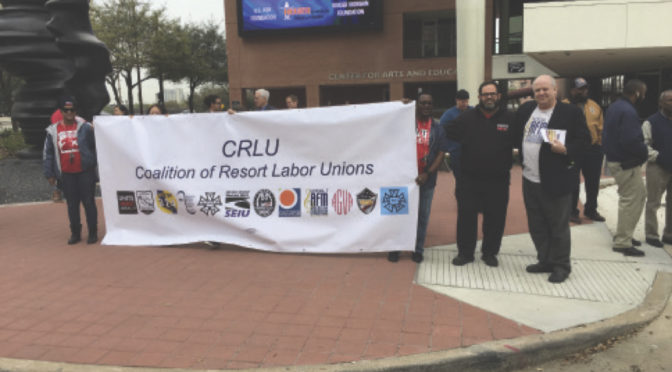 For at least 30 years, we at Local 7 (Orange County, CA) have been scratching our heads wondering why unions that bargain with Disneyland don’t put their heads together, exchange information, and support one another. As it turns out, other unions have been thinking the same thing. 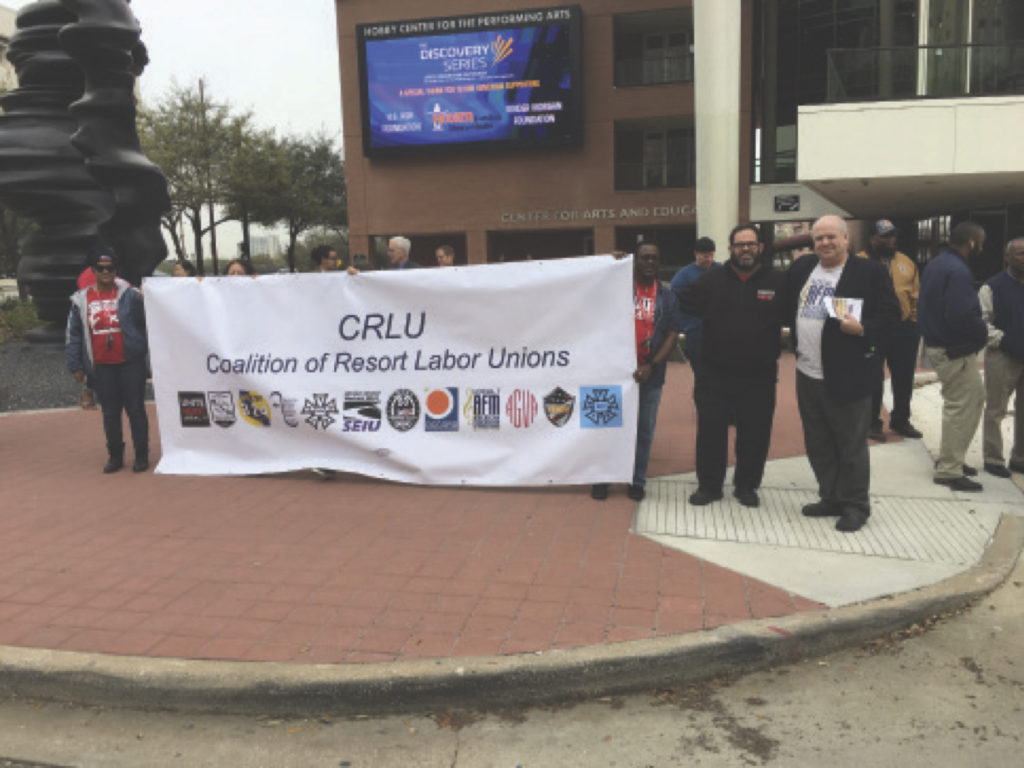 AFM Local 7 (Orange County, CA), along with 10 other unions, formed the Coalition of Resort Labor Unions (CRLU) to lobby for improved working conditions and pay for Disneyland Resort employees.

The catalyst for this historic alliance was a draconian attendance policy unilaterally promulgated by the company. After 11 unions presented 11 demands to bargain, leafleted employees on their way to work, and staged two town hall meetings, the policy was withdrawn. This was a first!

Next, the coalition set out to collect hard data about the economic conditions of resort employees. CRLU underwrote a survey that was independently conducted by the Urban & Environmental Policy Institute at Occidental College, in partnership with the Los Angeles-based Economic Roundtable. The resultant 125-page report is damning. In summary, it found that 11% of employees surveyed reported having been homeless—or not having a place of their own to sleep—within the past two years and 68% of workers surveyed are food insecure. Disneyland is the primary source of income for 91% of these workers, but only 54% work full time. The average hourly wage for these employees in real dollars dropped 15% from 2000 to 2017 (from $15.80 to $13.36). Meanwhile, a proposed compensation increase for Walt Disney Company’s CEO equals the total pay of 9,284 Disneyland workers.

Disney’s defensive and flat-footed response was to attack the survey as politically motivated, inaccurate, and unscientific; it’s unclear if statistics are taught at Mickey Mouse school. The full report can be downloaded at: https://economicrt.org/publication/disneyland.

The report was announced at a February 28 CRLU town hall with more than 1,000 people in attendance. Get a sample of the energy at this standing room only event, at: https://www.youtube.com/watch?v=HdooUVl4lwY.

The morning after the town hall, CRLU proposed a ballot initiative to the City of Anaheim. It proposed a minimum wage of $15 per hour for any large hospitality company receiving city subsidies. The minimum wage would increase by $1 annually to $18 per hour in 2022. Signatures are currently being gathered. 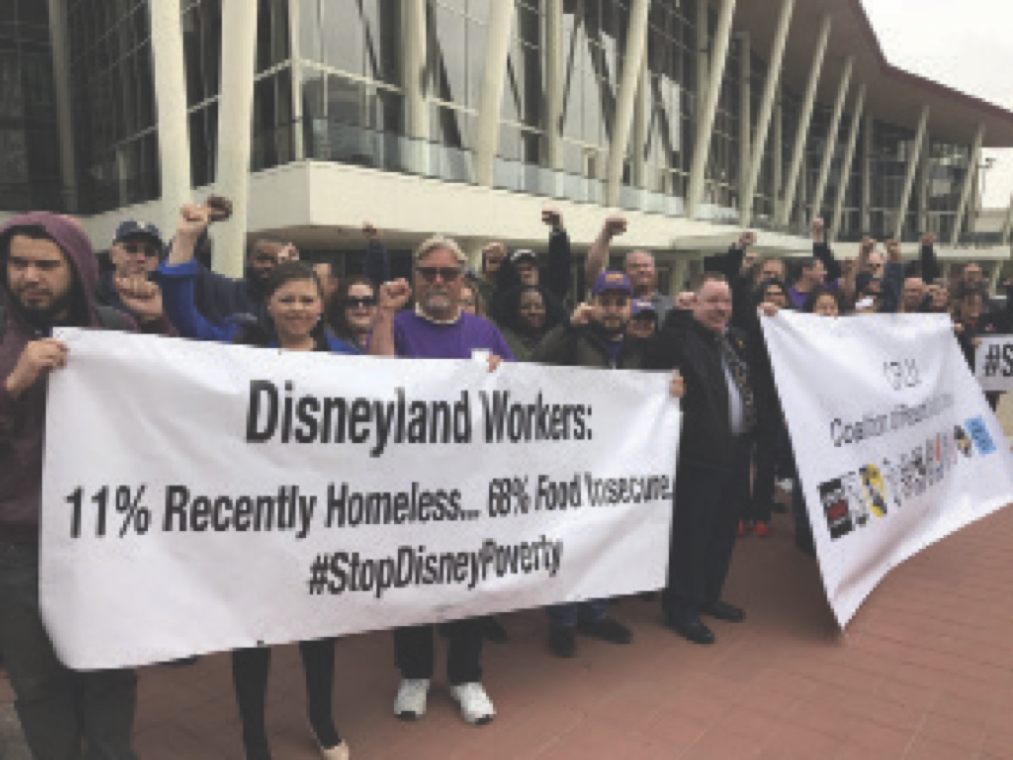 An independent survey of Disneyland workers conducted by the Urban & Environmental Policy Institute and underwritten by the Coalition of Resort Labor Unions found that 11% of workers had been recently homeless and 68% are food insecure.

On March 8, CRLU went to the annual Disney shareholder meeting in Houston. We were joined by SEIU Texas, as well as Teamsters and UNITE HERE! from Disney World. There were dozens of workers outside the meeting holding banners, handing out flyers, and talking to the media—as well as a half-dozen or so inside. We got the company’s attention. There were security guards and cops galore—and a very fine looking dog.

An Inspector Clouseau-like character tailed us with a camera at lunch and during our debrief in a nearby park. When confronted, he mumbled something about “urban planning” and “photographing the park” and scuttled back into the conference center.

Interestingly, the meeting, which had averaged an hour and 45 minutes for the four previous years, was cut off at one hour and six minutes—coincidently just as the first union member arrived at the microphone. In all, 10 questions were heard—well, a few questions and copious blown smoke.

Disney CEO, Robert Iger, reportedly said it best: “We’re getting a lot of praise and not questions, but I’ll take it.” In another notable coincidence, for the first time ever, 52% of attending shareholders voted against a nonbinding resolution to increase Iger’s compensation. That was taken “under advisement.”

In closing, there’s a lot of buzz in the media and online about our presence at the shareholder meeting, the survey, the town hall, and the living wage initiative. Please visit the CRLU Facebook page. This coalition is little more than 1½ years old; it is truly remarkable what can be accomplished when workers unite and work together in solidarity.