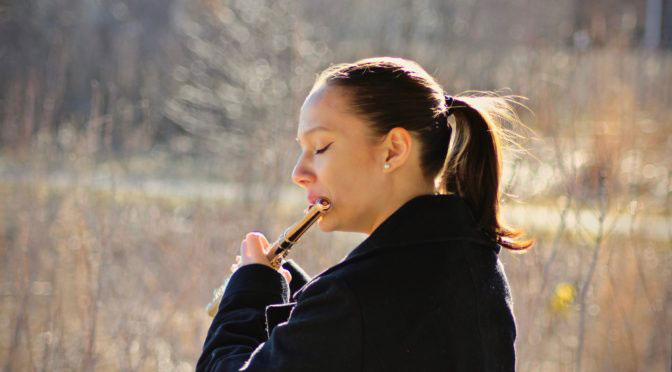 An important yet often neglected component of performance is proper biomechanics. Technique, skill, and interpretation all contribute to a musician’s professional potential, but the physical toll of holding an instrument and playing it for hours puts a strain on the musculoskeletal system. What’s more, the stress can result in debilitative injury. According to Alexandra Türk-Espitalier, a flutist, physiotherapist, and researcher at the University of Music and Performing Arts Vienna, it’s often when a musician reaches the point of physical discomfort that physical conditioning takes center stage.

In her book, Musicians in Motion: 100 Exercises with and Without Instrument, Türk-Espitalier compiled 100 exercises to correct misaligned playing posture and relieve playing-related pain and overuse syndrome. She has carefully designed a system of training and exercise, zeroing in on the source of the pain and addressing issues with exercise, strength training, and specific routines for different instruments.

According to Türk-Espitalier, who has worked with many orchestras and virtuoso solo performers in Europe, problems can be corrected, even for longtime professionals. Through an analysis of movement and posture with the instrument, a number of problems can be pinpointed: misalignment; muscle tone dysbalance; lack of flexibility, strength, and coordination; or faulty playing technique. She tailors specific relevant exercises for musicians to promote endurance, expression, and pain-free playing.
Instrumental technique correlates to body regions and awareness. Deep breathing and long airflow are directly related to the lower spine. Hip joints should be open and the torso stabilized with an upright pelvis. Big sound and fast articulation require a free neck, flexible eyes, free ears, and flexible lower jaw. For precise key touch you need light and long arms, wide chest and collarbone, and free and flexible shoulders.

Alignment and Exercise in Daily Life

Musicians are used to focusing on instrument-specific coordination, but practicing correct body alignment of joints and achieving muscle balance should extend to everyday activities. Türk-Espitalier notes that prevention should be designed according to strengths and weaknesses. To identify them, observe others and get feedback from professionals. To achieve a holistic outlook on your music with and without your instrument—and above all, to prevent injury—incorporate a training schedule that includes physical conditioning.

It’s a challenge, says Türk-Espitalier, for musicians to “dissolve” and replace old habits. “Faulty patterns have been practiced for many years and are, therefore, firmly embedded into movement, playing technique, and behavior. If basic movement patterns have to be relearned, I recommend a time when few concerts are scheduled.” Trying to resolve problems during a busy season can be difficult. She says, “Great care must be taken to ensure that a musician’s quality of playing is not diminished and the player does not become frustrated.”

Her book is comprehensive, from causes and bad habits to warmup, cool down, and breathing. There are solutions for almost every problem. Structured according to areas of the body and the associated physiological stress factors, the routines are easy to follow. For flutists and violinists, there are shoulder and arm exercises. Tension in the forearms, hands, and wrist can be reduced effectively with massage—the palm of the hand, the thenar, and the hypothenar. For instance, with cellists, massaging the thenar muscles of the right hand is recommended. The exercises are suitable for professional and recreational musicians alike.

Younger musicians are more tuned into instrument-specific fitness regimens. Türk-Espitalier says, “In Germany, Switzerland, and Austria, music physiology is now even a mandatory subject at some music universities.” She explains that the younger generation of professional musicians is more familiar with the concept and uses the techniques to enhance their playing skills. She views musicphysiology as a critical component of performance—playing with ease and pain free in a competitive industry.

Türk-Espitalier has worked with individual members of most of the major orchestras in Germany and Austria (Vienna Philharmonic, Frankfurt Radio Symphony Orchestra, WDR Orchestra Cologne, and more). She has conducted orchestra-wide workshops throughout Germany.