More than just a hometown favorite, the Atlanta Pops Orchestra has become a touring ensemble that regularly performs with an array of artists, like Chloë Agnew, formerly of Celtic Woman, John Driskell Hopkins of the Zac Brown Band, Broadway’s Craig Schulman, and hard-bop trumpeter Joe Gransden. This year, the Pops album with the bluegrass quintet Balsam Range (Mountain Overture) went to number six on the Billboard Classical chart and number five on the Billboard Bluegrass chart, in the same week.

President of the Pops Leonard Altieri of 148-462 (Atlanta, GA) says, “We’re not afraid to try anything new, stretching the boundaries of pops music. As long as it fits our ensemble, we can do big stuff, mainstream.” He adds, “We’re making a name for ourselves with the different types of concerts we do and also as a traveling orchestra.”
The orchestra uses union contracts exclusively, creating individual contracts for each concert and for each pops musician, members of Local 148-462. “We’re hired to play each time, every time for union rates. We’re doing 18 concerts this year, just the Pops. That doesn’t include backing up other musicians, singers, and bands.” Altieri adds, “If an act requires a backup group, we’re it.”

The Pops was founded by Albert Coleman in 1945, who served as music director for more than 50 years. In the early years, it consisted of 60 to 65 members. Today, the orchestra is half that size—but not because it’s having trouble surviving. On the contrary, Altieri, a 60-year union member and veteran violist of the Atlanta Symphony, says, “By shrinking our numbers, we could play more dates on smaller stages, take one bus instead of two—and it’s worked out perfectly.”

They have been doing it that way for 15 years. Currently, with Leonard’s son, Jason Altieri, as conductor and music director, the orchestra does as many as 16 pieces in one program and performs 15 to 20 shows per season. Low overhead allows them to take advantage of opportunities that may be cost prohibitive for larger organizations. In the last 10 years, the Pops has traveled to Taiwan, China, and Japan, performing more than 60 concerts overseas.
With an annual budget of approximately $100,000, Leonard says, “We’re surviving quite nicely.” He explains that they don’t have to pay a huge amount for board members or administration. Musicians’ jobs tend to cross over into administration and marketing. “They get union scale, plus travel. We pay bonuses for the stage manager, librarian, and personnel manager.”

The Pops is a close-knit group of professionals who give more than talent. Concertmaster Mary Burndrett’s husband is a violinist in the orchestra, who also manages a violin shop where most of the Atlanta Symphony and Pops go for repairs. Kevin Leahy plays drums with the Atlanta Pops Orchestra and also works in the digital marketing industry. “Since many of us have played together for so long, and we love what we do, it doesn’t feel like extra work when we contribute in ways outside of playing our instruments,” he says.

Leahy adds, “With a smaller group, 30 players, we’re a bit nimbler, able and willing to jump from style to style, or make changes on the fly. Since many of our players also perform with big bands, rock bands, Latin jazz groups, indie quartets, and other nonorchestral setups, we’re able to tap into that energy.” 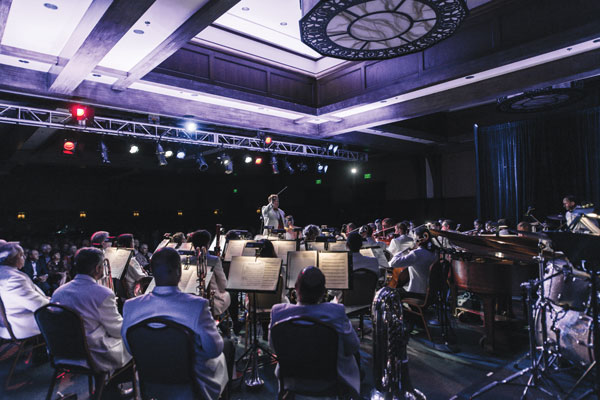 Atlanta Pops Orchestra in concert at the Ritz-Carlton in Reynolds Plantation, Georgia.

Musicians extend services to publicity, social media, and website updates. “Instead of being solely a nostalgia act, performing music from the heyday of pops and light classical music, we are taking on new creative ventures, working to push our boundaries and stand out from other music groups,” which, Leahy admits can be something of a challenge, but easier to do with a smaller orchestra. “It’s inspired some of the musicians to take on additional roles and tasks in adding to the orchestra’s success.”

In 2014, when Leahy joined the board of directors of the Atlanta Pops, he was tasked with programming their 70th anniversary celebration. He says that he knew little about the history of the orchestra so he did his homework. He scoured libraries in the Atlanta area, sifted through old files at the music union office, accessed newspaper archives, and reached out to people who could share recollections.

Leahy discovered a direct correlation between what the Atlanta Pops did in the past and what they could do today. The orchestra collaborated with Janey Miller (Miss Georgia 1946); Isaac Hayes and James Brown in the 1970s; Ray Charles, Chet Atkins, and Floyd Cramer in the 1980s; and Emile Pandolfi in the late 1990s. Leahy says, “I thought ‘what would this look like in 2015 and beyond?’”
He reached out to pop artists and musicians of different genres to collaborate with the orchestra. “For our 70th anniversary concert we performed with a variety of contemporary artists, some of whom had worked with us in the past and some of whom had little or no experience working with an orchestra. This included trumpeter Cecil Welch of Local 148-462, Grammy-winning hip-hop group Arrested Development, blues singer Michelle Malone, folk singer and Zac Brown Band songwriting collaborator Levi Lowrey, jazz trumpeter and singer Joe Gransden, and Riverdance alum Scott Porter,” many of them with Atlanta origins.

Occasionally, Pops members perform as the 14-piece Atlanta Pops Orchestra Ensemble to take advantage of additional opportunities. In that configuration, they performed with The Joe Gransden Big Band (2017), with Balsam Range at the Art of Music Festival (2016 and 2017), and at MerleFest (2018).

The 2015 Christmas album In the Spirit: A Celebration of the Holidays, with John Driskell Hopkins, led to a long-standing partnership. Hopkins brought on a number of contributors to the album, including singer and Broadway star Laura Bell Bundy and the bluegrass quintet Balsam Range. Leahy adds that Mountain Overture was also the result of this collaboration. “The music was arranged specifically for our orchestra,” he says.

“These collaborations, mixed in with more traditional pops material that we have always performed, helped us find our voice in today’s musical landscape.” Leahy says, “We don’t want to abandon the sound, style, and material we’re known for, but we also don’t want to avoid taking risks in looking for new ways for this orchestra to stand out.”

Leahy notes that Atlanta is such a mix of styles and genres, people are very supportive of collaborations within the music community, which also builds audience and taps into new opportunities. “By growing our list of collaborators we now have the opportunity to perform more often, which has strengthened our chemistry, as well as our marketability.”

For a digital history of the orchestra, go to www.atlantapops.com/timeline.