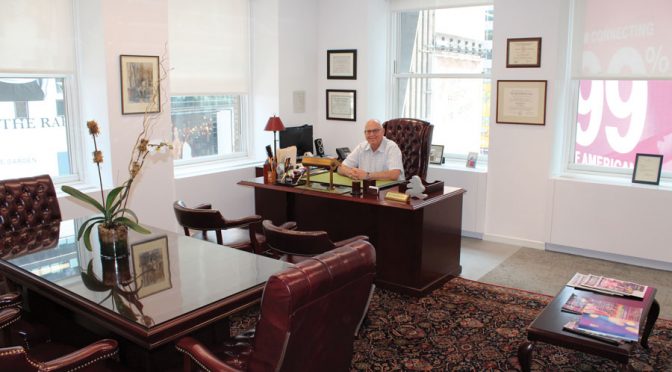 This issue of International Musician features some photos recently taken at the AFM office in New York which moved into new office space on the ninth floor at 1501 Broadway on April 1, 2019. The office consists of 18,332 rentable square feet (RSF). RSF is a term of art in that it includes square footage that cannot actually be utilized, such as a percentage of the common areas of the building (e.g. hallways, lobbies, and common restrooms). The ninth floor at 1501 had to be completely remodeled and the architectural firm of Loffredo Brooks was engaged to design our new space.

The old lease for the sixth-floor office expired requiring a move-out date no later than March 31, 2019. Any holdover meant we would incur a financial penalty. Even though the new space was not completely finished, we moved in during the last weekend in March. Our new lease is for 15 years and 10 months. We pay half rent for the first 10 months as part of the deal. After 10 years, the AFM has the option to leave if the real estate market presents a great purchase opportunity. While we would incur some costs if we leave at the 10-year mark (for the unamortized cost of construction that was paid by the landlord), we wanted to preserve the possibility.

The move went smoothly but we did experience one major hiccup. The telephone line from the basement of the building to the ninth floor had mysteriously been cut which resulted in a nearly two week delay before we had full telephone service. With this one exception, the move went well.

The new glass entry doors proudly display the AFM seal and lead to the reception desk and a waiting area. The office is bright and cheery with windows along the perimeter (Broadway, West 43rd St. and West 44th St.) overlooking Times Square—the crossroads of the world. The new office features a slightly larger boardroom to hold collective bargaining negotiations. It has banquette seating along one of the walls which can now accommodate attendance by musician negotiating committees. We also have two conference rooms; one conference room can accommodate six people and the other eight people. These rooms will be used for caucuses during negotiations and meetings at other times. The boardroom and both conference rooms are equipped with the latest technology to support video conferencing. Virtual meetings, when appropriate, help the AFM save on traveling expenses.

For years, our dedicated staff endured a very cramped kitchen/lunchroom area. The new kitchen/lunchroom has five tables with chairs. Two small alcoves contain banquette seating with tables for more private conversations. The one microwave oven which overheated regularly in the old space has been replaced with two new higher-powered microwaves. A new refrigerator, dishwasher, small ice maker, and water cooler complete the space.

A small wellness room with a reclining chair is intended to provide a place for a short, private respite for someone who is not feeling well.

Our sole tenant, the Music Performance Trust Fund (MPTF), occupies their own space within our office. It contains three private offices and a common area with a work station.

So if you are in New York City, please stop by to see your new home. I think you will like what you see.