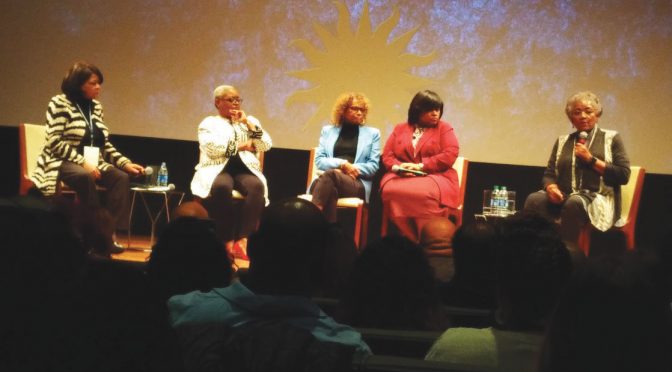 From January 17-19, I had the great pleasure of representing the AFM at the 2020 AFL-CIO Dr. Martin Luther King Jr. Civil and Human Rights Conference, held at the Capitol Hilton in Washington, D.C. The theme of the conference, “Give Us the Ballot, Political Boot Camp,” emphasized the importance of us getting out to vote and making sure our members understand why the 2020 election is critical.

The opening ceremony began Friday morning with the invocation by Terry Melvin, Coalition of Black Trade Unionists, and a welcome by Richard Trumka, president of the AFL-CIO. Trumka told us that Dr. King’s words are in each one of us—in our focus, our fierceness, and our fighting spirit. He said that Dr. King’s legacy is shaped by the leaders who came after him who continued to carry the torch that he lit; then Trumka took a moment for us to send out our best wishes to America’s greatest living civil rights leader, the conscience of the Congress, Representative John Lewis.

Trumka reminded us that Dr. King called for the march in Selma because Jimmie Lee Jackson, a woodcutter and a deacon, was shot and killed when he was 26 years old—all because he just wanted to vote. Shortly after the march in Selma, President Lyndon Johnson called on Congress to pass the Voting Rights Act. Today’s Supreme Court has weakened the Voting Rights Act; the voter ID laws of today are the new poll taxes and literacy tests. The attacks on voters’ rights were the fights of Jimmie Lee Jackson, Martin Luther King Jr., and John Lewis; these are still our fights today. “The best way to honor Dr. King’s memory is to lock arms and carry his torch forward together,” stated Trumka.

The Friday afternoon session opened with Tefere Gebre, executive vice president, AFL-CIO, who introduced the speakers for the afternoon plenary: “Give Us the Ballot: A Voting Rights Mandate.” The moderator was Gwen McKinney and the feature speakers were Dora Cervantes, International Association of Machinists and Aerospace Workers; Jeanne L. Lewis, National Committee for Responsive Philanthropy; and Leon Russell, NAACP. They all explained the significance of getting people involved in voting, because whom you vote for, on local and state levels, determines whether your streetlights stay on or whether you get funding for public schools; the right to vote and the power of votes brings political and economic power in its wake.

The highlight of the conference was Labor Night at the National Museum of African American History and Culture. The evening started with an empowering discussion, “The Colored Girls: Lessons from the Political Battlefield.” The featured speakers were: Donna Brazile, Yolanda Caraway, Bishop Leah D. Daughtry, and Minyon Moore, who are the authors of the book For Colored Girls Who Have Considered Politics. Each panelist spoke of how they got started in politics, and how they were affected by Martin Luther King Jr., Coretta Scott King, Shirley Chisholm, Jesse Jackson, and many others. Donna Brazile had a tremendous impact on me because she spoke so eloquently as to why each one of us should always follow our dreams and never give up hope.

After the presentation, the delegates were given time to explore the exhibits of the museum; we headed straight to the fourth floor where the history of African American Music is found. It is an extraordinary collection of all the great artists of jazz, rhythm and blues, hip hop, classical, etc. Every musician should see this historical collection.

Saturday morning was dedicated to community service, and Saturday afternoon offered several workshops. The three sessions I attended emphasized how important our vote is. Since “civics” is no longer being taught in most public schools, a lot of people do not understand the legislative process; therefore, we must educate everyone to vote in every election in their communities. Along with our vote is the 2020 census—again, we must encourage and educate people why it is important to be counted. The evening ended with a closing reception with remarks by Fred Redmond, United Steel Workers, and Tefere A. Gebre.

A last quote from President Trumka: “We’re the ones who make America great. We keep it safe … We tuck her into our bed at night. And come Election Day. … We vote! We’re fearless. We’re strong. We’re powerful. We’re united. We’re the American labor movement and we will not … WE WILL NOT … be denied!” 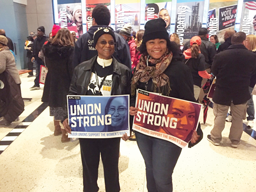 First, I would like to thank AFM International President Ray Hair for appointing me to serve on the AFL-CIO MLK Civil and Human Rights Conference planning committee in the fall of 2016. Thus, we have been instrumental in suggesting AFM musicians to fill spots where live music is needed. This year the Davey Yarborough Quartet, members of Local 161-710 (Washington, DC), provided music for the awards program and reception Sunday evening. Yarborough is the director of Jazz Studies at the Duke Ellington School of the Arts.

The 2019 MLK Conference was held January 18-21 at the Washington Hilton. I was excited that the Awards Gala & Reception would be held at the National Museum of African American History & Culture. However, in the week before the conference began, we were notified that, due to the government shutdown, the event had to be moved to Sunday evening at the Washington Hilton.

The Friday afternoon opening session began with conference co-chairs Fred Redmond, international vice president (human affairs) for USW, and Tefere Gebre, AFL-CIO executive vice president, welcoming delegates to Washington, DC. The theme of the conference was “The fierce urgency of now.” Redmond told us that labor must commit to reclaiming Dr. Martin Luther King’s dream of dignity. He reminded us that King’s dream was that all workers and all Americans be treated with dignity. We need to rededicate ourselves to doing the hard work necessary to make that dream a reality.

AFL-CIO President Richard Trumka gave the keynote address to open the session. In keeping with the theme of the conference, Trumka reminded us of what King called “the fierce urgency of now.” One year before he was killed, King issued a warning that “in this unfolding conundrum of life and history, there is such a thing as being too late. This is no time for apathy or complacency. This is a time for vigorous and positive action.” Trumka said, “This is that time. This is a time to take risks; it is time for us to get uncomfortable, because that is how real progress is made.”

After Trumka’s keynote address, we had a town hall conversation with former Tallahassee Mayor and 2019 Democratic Nominee for Governor of Florida Andrew Gillum. President and CEO of the National Coalition on Black Civic Participation Melanie Campbell moderated. Gillum spoke about his gubernatorial race. Following a discussion between Gillum and Campbell, there was a short question and answer period for delegates.

Friday evening there were several Key Issue Forums: “Women in Leadership: Building on the ‘Year of the Woman,’” “Take Back the Ballot: A Voting Rights Mandate,” and “Mobilizing Rising America: Organizing in the Face of Opposition.” Each of these forums had inspirational featured speakers.

On Saturday morning, we all met at the AFL-CIO building for a Department of Labor Wave Rally and Women’s March on Washington, DC. AFL-CIO Secretary-Treasurer Liz Schuler led the list of speakers for the Labor Wave to #StopTheShutDown rally. Then we took to the streets for the Women’s March.

Sunday morning started with an interfaith service. Reverend Darius Brown of the Christ Baptist Church of Delaware delivered the sermon. Following the service, welcome remarks were made by Representative Karen Bass (D-CA), Congressional Black Caucus chair, and the I AM Campaign’s Kenny Diggs (AFSCME). Tefere Gebre delivered the keynote address for the day.

Following the morning session, my husband (Bob Wright, USW) and I took granddaughter Morgann Clark, to two workshops: “Combating Voter Suppression in the Era of James Crow” and “This Is America: Young, Black, and Union.” She raised her hand to speak at the “Young, Black, and Union” workshop, and told us how to reach out to young people. Everyone applauded her comments and encouraged her to continue speaking up for what she believed in. She was thrilled to be a part of the conference.

I attended the awards gala and reception Sunday evening. The Davey Yarborough Quartet opened the gala with a half-hour of music as the delegates made their way to their tables and then performed an hour of dance music after the awards. The following awards were presented: Eyes on the Prize Award to America Postal Workers Union Local 1 President Keith Richardson; Drum Major for Justice Awards to United Food Commercial Workers International Vice President Robin Williams and Association of Flight Attendants-CWA International President Sara Nelson; Justice, Peace and Freedom Award to United Mine Workers of America International President Cecil Roberts; Defender of the Dream Award to Florida Rights Restoration Coalition Executive Director Desmond Meade; and At the River I Stand Award in honor of former National Vice President for Women and Fair Practices AFGE Augusta Thomas (1932 -2018).

Visibility is going to be our lifeline in getting other unions to recognize who we are. It was a great honor and pleasure to represent the AFM at this conference. Someday, I hope more representatives from the AFM will attend, for it is an eye-opening event that the Diversity Committee and other members of the AFM should experience. This conference reminds me of the importance of the labor movement and how, together, we can make a difference in the lives of all working people.