The Federation resumed its discussions with the television industry in July, at ABC headquarters in New York City, for a successor agreement covering musicians who perform on late night and prime time variety shows such as Jimmy Kimmel Live!, The Late Show with Stephen Colbert, The Tonight Show Starring Jimmy Fallon, Saturday Night Live, Dancing with the Stars, American Idol, and The Voice, and on award shows such as the Grammy Awards and the Oscars.

In past rounds, the networks’ refusal to bargain over Federation proposals for reasonable advertiser-supported (AVOD) and subscription-based streaming (SVOD) payments had stalled our talks, necessitating the development of an action plan to break the logjam and turn up the heat on producers.

During the previous round of discussions which took place in Los Angeles in mid-December, a rank-and-file campaign with a cool title—#RespectTheBand—motivated musicians from late night and variety shows to speak out about the unfair practice of paying a percentage of advertiser revenue from programs and clips shown on YouTube to actors and other artists, but refusing to do so for musicians.

The #RespectTheBand campaign resonated—prompting coverage from Variety and Deadline Hollywood. Never before had concerted activity toward the networks and their source-program producers occurred on such an aggressive scale. TV musicians themselves, in their campaign, were demanding fair and equal treatment.

In December, the networks blinked. They agreed to engage and negotiate over the Federation’s proposed residual formulas applicable when shows are streamed. They also advised that they needed time to carefully consider our proposals and prepare a reasonable response.

Fast forward to Monday, July 9, 2018 at ABC in New York, the start of our next round of negotiations. The rank-and-file members of our negotiating team, Marc Sazer and Jason Poss of Local 47 (Los Angeles, CA), working with an outreach team that included AFM Organizing & Education Director Michael Manley, Communications Director Rose Ryan, and the Organizing Departments of Local 47 and Local 802 (New York City), had spent weeks in advance of the July sessions facilitating the bargaining table presence of dozens of New York-based musicians who appear regularly on live television. They included band members from Saturday Night Live, from Stay Human (the Colbert band), and numerous Local 802 musicians from TV backup ensembles and awards show orchestras. It was an inspirational show of interest.

Compared to the size of our regular negotiating team—AFM IEB Officers Bruce Fife, Tino Gagliardi, Dave Pomeroy, and myself; Local 47 Vice President Rick Baptist; In-house Counsel Jennifer Garner and Russ Naymark; EMSD representatives Pat Varriale and Mary Beth Blakey; and local officers from Boston and Chicago—our group had “bulked up.” The networks now faced an expanded team that included their own musician/employees, who had become fully activated and involved in the issues.

We waited in anticipation for what the networks would offer. Nashville Local President Dave Pomeroy passed the time by writing a song for the occasion, “Respect the Band.” The ball was in the networks’ court. But what we received was disrespectful, insulting, and offensive. The networks offered to pay the house bands (not the guest artists, backup bands, or award show orchestra musicians) 1% of the applicable program fee for the perpetual right to exhibit a show, or portion thereof, on advertiser-supported streaming services, such as YouTube.

For example, if scale for a TV show were $500, the nets’ proposal would amount to a one-time payment of approximately $5 with no further payment. One musician responded that where a network had amassed 20 million hits on a single YouTube clip, the musician might get a whopping $5.

Not gonna work. No way, no how, particularly when global TV advertising spend was expected to rise from $175 billion in 2016 to $210 billion in 2021, according to industry statistics. The nets should have known better than to submit such a shallow proposal. Our side was incensed, but what a way to spark a protest rally, especially right outside the network’s door. 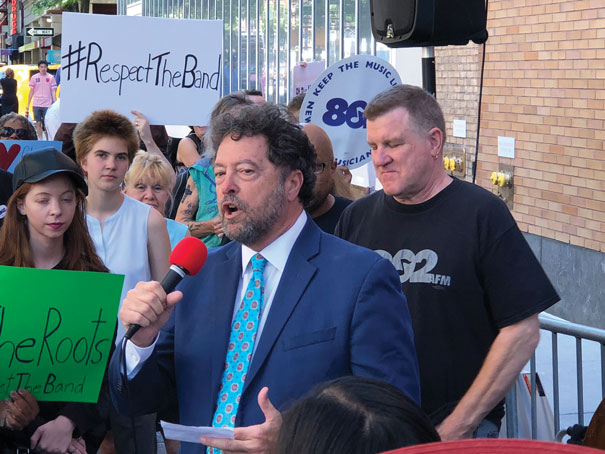 AFM President Ray Hair speaking at a July rally outside TV contract negotiations: “We’re mad as hell, and we’re not gonna take it anymore!” Musicians are demanding that the networks #RespectTheBand by ensuring they are paid for YouTube clips. 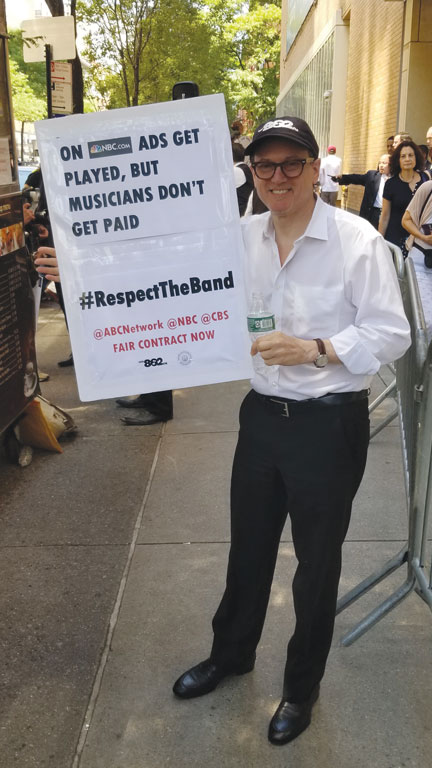 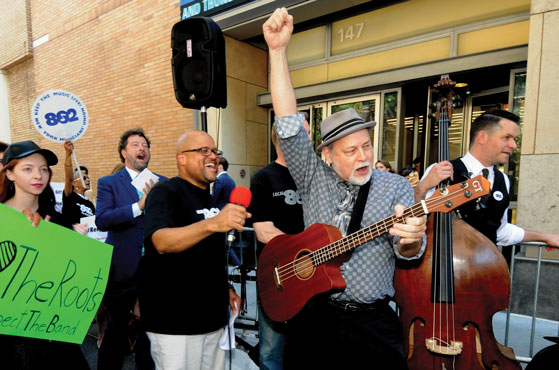 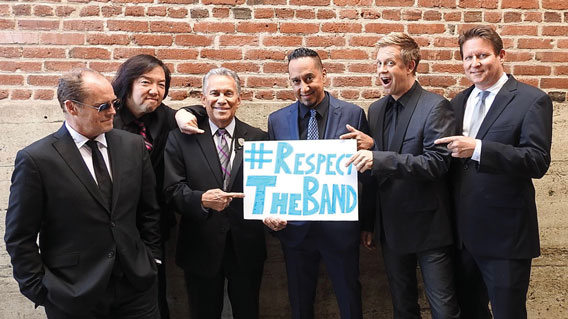 At 11:30 Tuesday morning, July 10, we hit the street. Supported logistically by Local 802’s excellent organizing department and accompanied by the Polka Brothers of Local 802, an energetic crowd of rank-and-file musicians took over the corner of 66th Street and Columbus Avenue, at the doorstep of ABC. Joined by representatives from sister unions SAG-AFTRA, IATSE, and Actors’ Equity, and by city elected officials, TV musicians preached their message to an enthusiastic audience.

Louis Cato, of Jon Batiste’s Stay Human band from The Late Show with Stephen Colbert, says, “This is about musicians who have regular gigs like me, but it’s also about the hundreds of other musicians working on awards shows, at sporting events, or as guests on live television. I’ve been fortunate to make a career in music, but the world has changed, and we need to change the rules. If the next generation of musicians can’t make a living—everyone loses.”

“I’m a proud union musician. I come from a union family. I’m standing here today and calling on the networks to show some common decency—and simply treat us just like they treat other performers,” says Alvester Garnett, a noted jazz drummer and educator who has guested on numerous live television shows. “Musicians just want our slice of the pie. We aren’t asking for the whole pie—just the same slice other performers working on these very same shows get.”

The rally was cathartic. It was exactly what was needed, at exactly the right time. Halfway into it, we noticed two of the networks’ negotiators strolling down the other side of the street, trying to look inconspicuous while surveying the scene. By the end of the week, it was obvious the rally made a difference.

By Wednesday afternoon, the nets blinked again, indicating during sensitive discussions that residual payments from advertiser-supported streaming of broadcast programs could be part of a successor agreement. It was a major step in the right direction.

Thanks are in order to our TV musicians, Local 802 officers, members, and staff, and the entire negotiating and organizing team for helping build momentum in these negotiations. We will continue discussions with the networks in October. Please stay tuned.