The Federation’s recently concluded Sound Recording Labor Agreement (SRLA) has brought new life to both the Sound Recording Special Payments Fund (SPF) and the Music Performance Trust Fund (MPTF), which are important residual components of that agreement. As music consumption transitioned to streaming, both funds experienced declining revenue due to the precipitous drop in royalties from physical recorded product (CDs, etc.) and digital downloads, which had been the sole sources of revenue for the funds.

MPTF, which works closely with officers and staff of Federation locals to sponsor thousands of live, admission-free musical performances each year throughout the United States and Canada, was subsisting on its rapidly declining royalty base. It was running on fumes by 2016. As we ramped up our negotiations with the labels that year, I was determined to not only find a solution for MPTF and restore its health, but to also address funding issues at SPF and our pension fund. Now, new SRLA money from digital distribution, including online streaming and licensing, is revitalizing MPTF and SPF and providing substantial new contributions to the AFM-EP Fund.

Why the Commitment Toward MPTF? 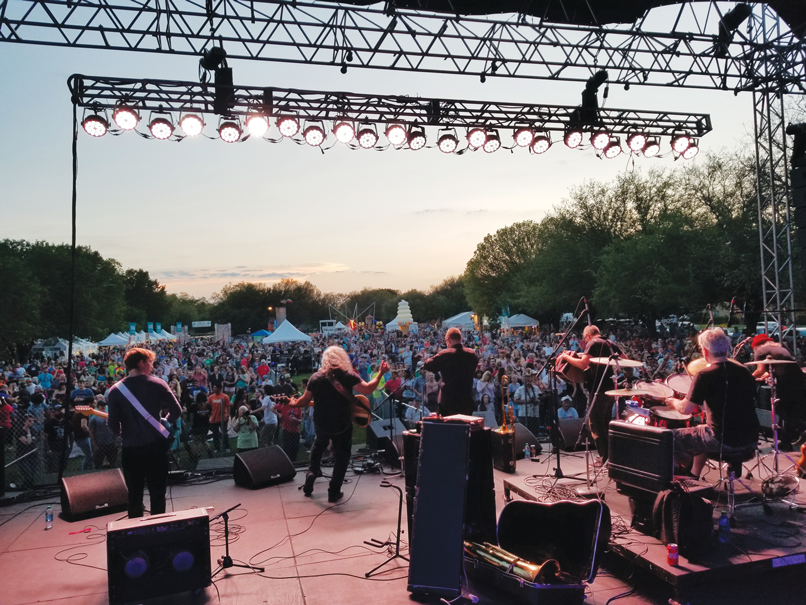 Brave Combo, members of Local 72-147 (Dallas-Ft. Worth, TX) closing the 2018 Denton Arts and Jazz Festival, entertaining an audience of thousands. The band opened the event 33 years ago performing on a flatbed trailer and have performed every year since.

Over its 70-year history, MPTF has served the Federation, its locals, and its audiences extraordinarily well. From my decades of experience as a local officer, I know how invaluable a dynamic local MPTF program can be. For the vital task of organizing and recruitment, local officers deserve to have the same resources from a healthy and secure MPTF as I had.

My first contact with the AFM was as a college freshman music student when I performed a Trust Fund gig at an outdoor concert on campus.  Years later, as a new officer at Local 72 (now 72-147) in Fort Worth, Texas, I saw the obvious built-in advantages made possible by the local’s program of regularly recurring educational and institutional MPTF performances—the supplemental employment provided; the opportunities for membership recruitment, and audience-building; and the prospect of positive recognition for the local and its members in the communities served. One stellar example of the MPTF advantage has everything to do with the photo below of two-time Grammy winner and Local 72-147 members Brave Combo performing for an audience of thousands on April 29 this year.

Here Is How the Story Goes

Early into my tenure at Local 72, a member advised me that a notice on the bulletin board in the student union at North Texas State University (now UNT), requested that students contact the city parks department to volunteer for summer noontime performances on the Denton, Texas, courthouse square. “Could we turn these into MPTF gigs and get paid for them?” the member asked.

I suggested the member return to the bulletin board, remove the notice, and get me the contact information. In my discussion with the supervising parks department employee, I was amazed to learn of his familiarity with MPTF from his work with another AFM local before moving to Texas. He seemed pleased and downright eager to entertain a relationship with Local 72 to arrange and deliver the entire program of noontime concerts with co-funding through MPTF. The reputation and goodwill of MPTF had preceded me.

The program became known as Concerts on the Square, and was a summer entertainment staple for decades, hosted by the city and the local. A couple of concerts into that first series, the same city employee asked if I thought an afternoon of jazz in a public park would draw an audience. “What a great way to showcase Denton’s culture of musical excellence!” I replied. The city floated the idea with the Convention and Visitors Bureau, which agreed to promote it. We settled on a date—the last Sunday in September—and Denton Jazzfest was born, again arranged by Local 72 and co-funded by MPTF.

By 1991, with media promotion from sponsors KNOK-FM and KJZY-FM, the Denton Jazzfest audience had grown ten-fold. We stayed with the same basic format—an afternoon of great music, booked by Local 72, in a beautiful city park, all admission-free, all co-funded by MPTF.

Also in 1991, the merger year for Locals 72 and 147, the popularity of Denton Jazzfest led to a partnership arrangement with the Denton Festival Foundation and an agreement to expand the event to three days in the park, with three stages presenting all styles of music during the last weekend in April. Now known as the Denton Arts and Jazz Festival, and featuring performances involving several hundred union musicians, the event would eventually draw an estimated 225,000 attendees. But true to its humble beginnings, the format remained the same—a weekend of great jazz and popular music, booked and managed by Local 72-147, all free to attend, and co-funded by MPTF.

My message to local officers and members is this: community leaders are interested in sponsoring public events where citizens can gather and enjoy good music, food, and art. Visit with your community. Offer to provide and manage the music lineup for a community event, subsidized by MPTF. Keep after them about it. Start small, but think big. Get your foot in the door and build relationships. And when you get your shot, use it to attract and build audiences. If you do, community leaders will appreciate you and every musician in town will want to play your show. What an advantage for your local. With MPTF, and its new lease on life, you have a real advantage, especially with the leadership of MPTF Trustee Dan Beck.