The award-winning Broadway musical The Band’s Visit is based on a 2007 Israeli film of the same name. It tells the story of a group of Egyptian musicians, the Alexandria Ceremonial Police Orchestra, who come to Israel to perform and end up getting stuck overnight in the wrong town.

The bond between Local 802 (New York City) members Chick Corea and Steve Gadd goes back more than 50 years. The two-disc album Chinese Butterfly is a result of the two musicians’ long-held desire to work together more intensely. 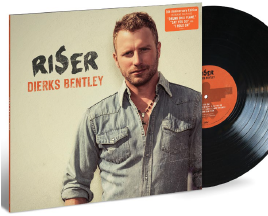 Dierks Bentley Seven albums into his career, Riser was a defining album for 14-time Grammy nominated country singer/songwriter, restauranteur, and philanthropist Dierks Bentley, of Local 257 (Nashville, TN). The album’s blend of down-home party music and introspective ballads resulted in one of the most personal of his career, garnering rave reviews, critical accolades and chart-topping […]

Local 47 (Los Angeles, CA) member John Rodby makes reference to his aversion to the use of computers in composition and orchestration with the title Tyranoscorus Rex.

Renascence is defined as the revival of something that has been dormant. This is the third solo album from musician, songwriter, and producer Mike Daly of Local 257 (Nashville, TN).

This is the first new album in six years for the Local 257 (Nashville, TN) member. Though Kathy Mattea has enjoyed two Grammy wins, four CMA Awards, four number one country singles, five gold albums, and a platinum greatest hits album, her continued career was in doubt when her voice began to change a few years ago.

John Carter Cash, We Must Believe in Magic

“No matter our path, the magic is inside us all. And though it may be forgotten, it can be remembered once again … It is only up to us to do one single thing, and do it purely … believe,” says Local 257 (Nashville, TN) member John Carter Cash.

Making the transition from teen star to career musician, the Local 149 (Toronto, ON) member’s self-titled album has Mendes trying different styles and collaborating with a number of well-known artists.