Home » Officer Columns » 100th Convention: A Union that Is Stronger Together


100th Convention: A Union that Is Stronger Together

120 years after our founding Convention in October 1896 in Indianapolis, Indiana, the Federation convened its 100th Convention—a milestone for any union—June 20 in Las Vegas. With more than a century of advocacy and 100 conventions to its credit, the Federation’s enormous accomplishments for professional musicians, economically and politically, were celebrated not just by elected officials and delegates, but by our sister unions, dignitaries and guests. 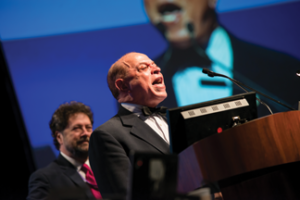 Delegate and Local 174-496 (New Orleans, LA) President “Deacon” John Moore sings “A Change Is Gonna Come” from the podium on the final day of the AFM Convention.

adjournment. For anyone who might have wondered why on earth there ever was an American Federation of Musicians of the United States and Canada, just hearing the supreme musicianship of such instrumental luminaries as Marvin Stamm, Dan Higgins, and Tom “Bones” Malone, the touching memorial service accompaniment by members of the Las Vegas Philharmonic Orchestra, and the many other fine performances by Local 369 (Las Vegas, NV) musicians during the course of our meetings, provided context and nourishment. The power of our members’ music became the backdrop for the attitudes, issues, and the discussions that followed.

As those present would realize, particularly after hearing the heartfelt testimonials by Marv, Dan, Tom, and also by National Symphony Orchestra violist Jennifer Mondie, whose incredible video on the Federation’s new website landing page was streamed to the delegates during my report, the power of this union makes a difference in musicians’ lives, helping them build careers that inspire millions worldwide. As talents, Marv, Dan, Tom, and Jennifer are certainly mountains, but with the union at their side, they can reach their peak.

As many of you know, in addition to reviewing various bylaw changes and policy resolutions, convention delegates elect Federation officials for three-year terms effective August 1 of each convention year. I am honored and privileged to have been re-elected to serve for another term. I am also deeply gratified that delegates chose to re-elect Vice President Bruce Fife, Vice President from Canada Alan Willaert, executive committee members Joe Parente, Tino Gagliardi, Dave Pomeroy, and Tina Morrison.

We are also fortunate that the delegates chose Symphonic Services Director and former 802 Vice President Jay Blumenthal as our new secretary-treasurer, and Local 47 President John Acosta as a new member of our executive committee. First and foremost, we are a team, and we will continue to work together to improve the condition of the Federation as we have done over the past six years.

The 100th AFM Convention was certainly a major celebration, but it was also a time to remember what our ancestors were doing when they started their engines in Indianapolis at a dangerous time for unions, 120 years ago. Our founders were activists. They didn’t take on the employers because they were consumed by petty differences. They did it because they believed that by working together they could save lives. They also knew there’d be the hate preaching, scapegoating, and the divisiveness that comes with activism. They knew that some of our own members would become union busters to pursue the selfish politics of personal enrichment. They knew it would be a fight. 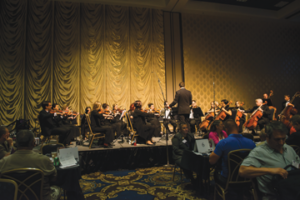 Members of the Las Vegas Philharmonic Orchestra entertain delegates before the second day of the AFM Convention convenes.

That is why it was important to remember who we are, where we came from, what we did, and how we did it, over a span of 100 conventions, before and after the advent of technology, the invention of records, radio, film, the talkies, television, cable, the Internet, and everything else. What did we do in the beginning?

We didn’t make excuses. We got out of our own way. We worked together, compromised, and organized. Our founders weren’t in this for themselves or for other selfish interests. They were in it to build a union that would endure for generations. They knew the way to reach our potential and grow a strong union was to agree on a set of unifying principles to build union power, and then aim that power toward our employers to promote fairness and improve members’ lives. And it’s just as important to know that, when we abandon the principles that bound us together to begin with, we lose. We hurt each other, and we become the very thing that destroys us—where members take from each other what they believe they can’t get from the employer.

For me, the most compelling moment of the entire convention came at its conclusion, when Local 174-496 (New Orleans, LA) delegate “Deacon” John Moore took the podium at my request to sing Sam Cooke’s “A Change Is Gonna Come.” It was an occasion when John Acosta, our first-ever elected person of color, was about to be sworn in as a new executive committee member.

Deacon had opened the convention by singing “The Star-Spangled Banner” with Walt Boenig’s Big Band, and then he closed it with an a cappella rendition of the song that became an anthem of the 1960s civil rights movement. And it just so happened to be Deacon’s birthday. His soulful, emotional delivery was riveting, and so powerful—something no delegate in attendance will ever forget. Here was another demonstration for all to see. As musicians, we have power. Through the power of our music, we have the strength to find the unity we need to achieve our goals.

That is why the 100th Convention was a renewal of faith in what we can do together; it was about remembering the great things we did together during our historic past, and understanding what we can be. We can do it all again because we have to. Our union must be about what we can do for each other, not to each other. It’s about sticking together and protecting each other, because we are stronger together. That’s real unionism. That is our purpose, and that is why we are the American Federation of Musicians of the United States and Canada. God bless this union. Here’s to another 120 years.