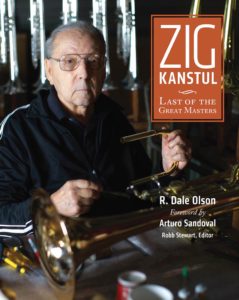 Zig Kanstul: Last of the Great Masters, by R. Dale Olson, is an account of the lineage of the great masters of American brass musical instrument making, culminating in the story of Zig Kanstul. Olson walks the reader through the history of significant brass design innovation and manufacturing in the US from 1824 to 2016.