While I was using some personal time, not at Federation’s expense, I recently found myself in Phoenix with friends. Many of them were in attendance at a marvelous gig, which was held in a jet airplane hangar dressed out like a dude ranch. The almost unbelievable interior was transformed by the Emmy award winning set designer for Lost.

I felt honored with my back up band, The Herndon Brothers, part of which just finished a tour with Lyle Lovett of Local 257 (Nashville, TN) and the horn section board members of the local.

So while there, and after my paid gig, I took time to visit Local 586 (Phoenix, AZ) and meet with members of the board to discuss some local issues.

I also attended a benefit with many fine jazz musicians. The event raised funds for the Young Sounds. The Young Sounds have a special place in my heart. As I recall, in 1983, when our convention was in Phoenix, the Young Sounds entertained the delegates. I am so pleased the local still has this program. I was delighted to donate part of my earnings from our gig to the event. I ran into one of the teachers of the Young Sounds at the Phoenix Symphony. The orchestra member said he is anxiously awaiting the time when his children are old enough to be in the Young Sounds. Sometimes it’s all worth it.

Oh, by the way, the Phoenix Symphony, I’ll call it the “Symphony 500” did a one-of-a-kind performance in honor of the NASCAR race in Phoenix. Rusty Wallace conducted the Star Spangled Banner with a Barret Jackson Ferrari on stage and $70 million worth of cars outside. The symphony was well received. This multimedia event might catch on in other NASCAR towns.

AFM President Hair and I attended the AFM SAG-AFTRA Fund meeting where we served as trustees. The Fund defrayed the cost of rent by purchasing a building in Los Angeles. We attended the open house for the new location. One of the interesting points at the meeting was the fact that we are starting to reap the rewards of the Audio Visual Treaty in Beijing, which I attended at my own expense.

We now have countries forwarding the AV money they have collected for our product. These funds are only sent to members and distributed to members—a good reason to belong to the AFM. Please read the AFM SAG-AFTRA Fund article on page five.

Hair, at this writing, is in London and then he’ll travel to Budapest for further meetings on streaming and Audio Visual. We are always fighting for our members.

The International Executive Board (IEB) third quarter meeting is for the purpose of approving the next year’s budget. And because of a bylaw initiated by yours truly, it is to be a balanced budget. And it is a balanced budget, but not without some painful discussions and decisions.

The convention approved increases that were to produce amounts that just did not materialize.  This was partially due to per capita shortfalls and work dues shortages, in particular in Local 47 (Los Angeles, CA).

In an effort to cut costs the IEB approved a policy that has all travel preapproved by the president—including mine. Until further notice, all secretary-treasurer travel billable to the AFM will be minimized or, as in the past, will be paid by me personally. That was not the intent of the policy, but is my personal contribution. 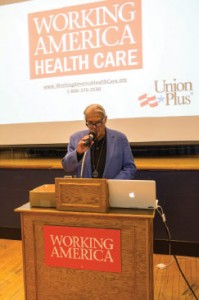 Get your cowboy boots and hats because we may be going to Fort Worth, Texas, for the next AFM Convention in 2016. While visiting Fort Worth, a team stayed over to explore possibilities for the AFM’s 100th Convention. I am here to tell you all that the convention authority and the Worthington Renaissance gave us quite a show and demonstrated the possibilities for a rip-roaring good time in President Hair’s hometown. Obviously the 2016 convention will feature entertainment like few other past conventions due to Hair’s contacts in the entertainment world.

I must tell you that I also revisited the Riviera Hotel in Las Vegas, Nevada, and looked at their offerings—$59 rooms during the week and $79 on the weekend. The third-party $80,000 cost for AV tech at the Riviera was extraordinary in 2013. That won’t happen in Fort Worth as the Worthington owns all its own audio-visual. Now, I’m not in any way saying that the International Alliance of Theatrical Stage Employees (IATSE) was out of line. It even contributed personally to the Local 30-73 (St. Paul-Minneapolis, MN)

fundraising to support the orchestra during the lockout. It was the rental company that charged us prices, in some cases high enough that we could have rather purchased the equipment. Hair is very familiar with IATSE in Fort Worth. We are currently awaiting word on room rates, which we know will be somewhat higher, but we hope to be in line with our means.

The last two months my column involved the Affordable Care Act and Working Americas participation through the AFL- CIO. On November 17 there was an open enrollment event held in New York City at the New York Hotel Trades Council auditorium.

AFM’s Julie Bluestone Band was a great kick-off for the first official Working America Health Care program event in New York City. I joined the band for “Stormy Monday” to celebrate the beginning of open enrollment. Freelancers, part-timers, and other uninsured workers enjoyed the music, refreshments, and education about their health care options for members of the Writers Guild of America-East (WGAE), AFM, SAG-AFTRA, AGMA, family, friends, and more!

Other labor leaders from OPEIU, National Writers Union, and the New York CLC and I were jazzed by the program and good response from AFM members and the NYC community. Even if you don’t live in New York, you can still take advantage of the program’s benefits.

If you signed up for Obamacare last year, be sure to shop around for the best value before the December 15 deadline. Go through WorkingAmericaHealthCare.org/AFM to connect to licensed agents and the most insurance plans of any marketplace—at no additional cost. Plus you receive a complimentary Health Advocate service that can help you use and make sense of your plan once you’ve enrolled.

I urge you and anyone you know—including all family members and friends—to check out the website or give the program a call to get covered and avoid a fine of $325 or 2% of your income.

As a member told me at the event, “Health insurance is crucial for peace of mind. And it can be affordable.” The more people who sign up, the more insurance companies will compete, and the lower our collective health care costs will be.