Late winter and early spring is the time for organized arts advocacy in Washington, DC. AFM President Ray Hair makes an annual trip to Washington, DC, to lend his leadership to our legislative-political mission. The results are always highly successful, not just for AFM musicians, but for musicians across the country. Hair’s presence raises the status of all artists, as well as all other workers in arts and entertainment disciplines, who are affected in some way by the Executive, Legislative, and Judicial branches of government.

In February and March, our advocacy work extended across a range of government platforms. This is a brief round-up of our activities. 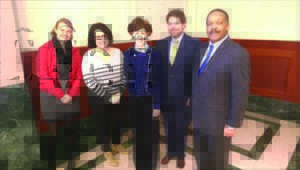 On March 14 and 15, Hair, National Symphony Orchestra Violist Jennifer Mondie, who is also on the governing board of the International Conference of Symphony and Opera Musicians (ICSOM); AFM Director of Touring, Theatre, and Immigration Michael Manley; and AFM Canada Executive Director Liana White joined me in Washington, DC, to lobby on a broad range of issues.

Hair’s first stop was at the US Department of State where he was hosted by the Cultural Diplomacy Division, Bureau of Educational and Cultural Affairs, Chief Amy Bliss-Iacoella. The purpose of the meeting was to open doors with the State Department relating to cultural exchange for professional musicians interested in travel abroad as representatives of the US Government. A more in-depth report will follow in the May 2016 International Musician.

On March 15, Hair and his staff participated in an hour-long visit with Representative Bennie Thompson (D-MS 2) who serves as the ranking member of the House Homeland Security Committee. The purpose of the meeting was to discuss possible solutions to delays in P-2 and O-1 visa processing by the US Citizenship and Immigration Services (USCIS) service centers in Vermont and California.

During the meeting, we also raised our objections about visa approvals by USCIS that were counter to the AFM negative opinion letters for groups with flawed applications that the AFM does not believe meet federal immigration guidelines. Work on resolutions to these issues is moving forward; we are confident that solutions will be forthcoming.

At the end of the day, we joined labor affiliates at a reception for Congressman Cedric Richmond (D-LA 2) at the United Union’s building. Richmond graciously gave Hair and me a 15-minute audience to discuss the Fair Play Fair Pay Act, as well as immigration. He is a member of both the House Homeland Security and Judiciary committees.

On March 16, I attended a reception for
a great friend of the AFM, Representative Louise Slaughter (D-NY 25). In addition  to being the ranking member of the powerful House Rules Committee, Slaughter is a founding member and co-chair of the House Arts Caucus that helps deliver member support for federal arts programs, in particular the National Endowment for the Arts. Her decades-long support for the arts in America, as well as her ability to organize members of Congress around our issues, is priceless. The AFM is committed to helping her remain in the US Congress. 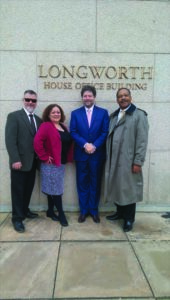 Each year, the AFM serves as a national cosponsor for Arts Advocacy Day. This event brings more than 500 arts advocates to Washington, DC, to make the case about the economic and cultural value that the arts bring to communities across the country. In addition to the Nancy Hanks Lecture on Arts and Public Policy at the Kennedy Center and a White House briefing on administration-supported federal arts programs and policy, a broad range of arts-related issues are lobbied with House and Senate members, and their staff. These meetings leave an indelible impression about the power of the arts to make positive change in our communities.

Arts Advocacy Day, hosted by Americans for the Arts, is recognized on the Hill as one of a few important Washington, DC, arts-related conferences trusted by federal leaders. A few of this year’s issues were: arts education funding and policy, support for the National Endowment for the Arts and other federal arts agencies, charitable giving and tax policy, visa processing and cultural exchange, and support for public broadcasting.

On February 8, Senator Orrin Hatch (R-UT), along with Senator Patrick Leahy (D-VT), introduced S 2510, the Arts Require Timely Service Act of 2016 (ARTS Act), which codifies O and P visa processing times. The bill, as outlined on the Library of Congress website: “… amends the Immigration and Nationality Act to require the Department of Homeland Security (DHS) to adjudicate O and P visa petitions (nonimmigrant visas for aliens with extraordinary ability or achievement, and athletes, artists, and entertainers) within 14 days after receiving such petitions and related documents. The bill grants premium visa processing without charge to a petitioner that is a nonprofit arts organization, if DHS does not meet the deadline for adjudicating a visa petition.”

The ARTS Act was introduced in the 113th Congress and passed out of the Senate. However, it failed for the lack of House action on immigration reform.

On March 8 (Arts Advocacy Day), Senator Tom Udall (D-NM) Introduced S 2648, the Comprehensive Resources for Entrepreneurs in the Arts to Transform the Economy Act of 2016 (the CREATE Act). It provides for a host of new arts-related tax proposals in addition to arts-related proposal expansions into such federal programs as the Small Business Administration; Departments of Commerce, Agriculture, and Homeland Security; the Internal Revenue Service; and the Federal Emergency Management Agency, to name a few. The objective is to create arts-specific programs that help entrepreneurs in the arts to take advantage of federal program business guidance and funding.