Union Privilege (UP) understands the value of home. For years, we’ve offered mortgage grants to help our members make payments in times of hardship, and provided discounts on heating and cooling to keep those homes comfortable. Because we believe that everyone deserves a safe, comfortable, and affordable home, we’ve made it our mission to team up with Habitat for Humanity at our annual Liaison Conference and lend a hand building homes for families in need.

This year, as part of San Diego Habitat for Humanity’s Building for the Brave project, and the 10th anniversary of Union Plus working with Habitat, almost 40 Union Privilege staff members and liaisons worked a full day on four houses for wounded veterans and their families. With the foundation, walls, roof, and drywall already constructed by previous groups of volunteers, the Union Plus crew spent the day cutting and laying tile, building kitchen cabinets, laying stone for the driveway, and building fences.

Each spring, Union Privilege picks a new city to host its liaisons for a unique opportunity to review and develop ways to increase the usage of the Union Plus member benefits throughout the labor movement. For the last decade, Union Privilege has been committed to giving back to the communities where the liaison conference is held each year.

While Union Plus gathers liaisons from each of their unions to improve the benefits for union members, San Diego Habitat improves the lives of potential homeowners building homes, communities, and hope. Habitat relies heavily on volunteers, as there is only one full-time employee at each job site per day. Oftentimes, the Habitat volunteers include the future homeowners themselves. Eligible families volunteer 250 to 500 hours of their own “sweat equity” to their house or at another Habitat site. That’s just one more way Habitat fosters a sense of community, and one more reason Union Plus is honored to be a long-standing supporter of their cause.

San Diego County is home to more than 400,000 veterans—one of the highest concentrations in the country. San Diego Habitat for Humanity launched two programs to “serve those who served us” because of this.

The Building for the Brave program allows Habitat to provide affordable homeownership opportunities to wounded veterans and their families. The Repair Corps program is designed to help veterans by creating healthier, safer home environments through critical repairs and improvements.

“The work was challenging, but it felt great to give back to this wonderful community,” Union Privilege President Leslie Tolf says. “One of the values of Union Privilege is to improve the lives of working people, and partnering with Habitat was a way we could help improve the lives of US veterans, some of the bravest and hardest working people out there.” 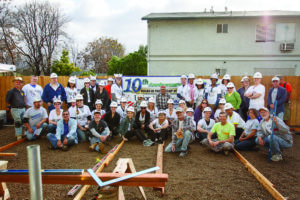 Each volunteer received first-hand training and gained valuable experience in home building. A team of four tiled the whole first floor of one of the houses, and another team of four built all of the cabinets for the kitchen. Outside, several volunteers laid stone bricks for the driveway, while others built fences between the houses to give each house privacy. Not lost on the volunteers was the good they were doing for others.

“It is so great that we get to come together and help such an important cause in a community that needs it,” Valerie Cole, a union services rep from Union Plus, says.

Union Plus continues to strive for service in the communities they visit, and by giving a day of their time to help families in need, they lived out one of their values of helping improve the lives of working families.

“It makes a long-lasting difference,” Elizabeth Berg, director of development for San Diego Habitat, says. “With the work that Union Privilege did, that work stays—and will not only stay for that family, but for generations. It’s there; it’s permanent. You can always come back to San Diego and say, ‘I worked on that house.’”