Home » Legislative Update » TEMPO: One of the AFM’s Most Effective Advocacy Tools


TEMPO: One of the AFM’s Most Effective Advocacy Tools

The Taskforce for Employment of Musicians Promotional Organization (TEMPO) was established in 1961 when the AFM was steeped in legislative battles over copyright, the Cabaret Tax, and royalty distribution, which followed prior legislative battles over the LEA Act, the National Labor Relations Act, and a host of other federal legislative initiatives. The need to help AFM-friendly federal legislators stay in Washington, DC, to continue the fight on behalf of professional musicians remains essential to our existence. TEMPO is one of the most recognized and highly respected bipartisan labor affiliated political action committees in Washington, DC. Because of the relevant successes that the AFM Office of Government Relations and the fund have accomplished, these important internal institutions have served to provide high quality, added value to your AFM membership.

Today, our legislative battles continue and TEMPO is one of the only arts and entertainment political action committees in the US operating under rules established by the Federal Election Campaign Act of 1971 and other federal campaign acts more recently enacted. Bipartisan contributions from the fund support a range of legislators who serve as Democrats, Republicans, and Independents in the US Congress. 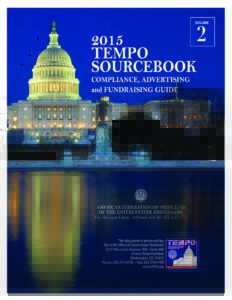 AFM members, a part of our fund’s restricted class of donors, support TEMPO by giving voluntary contributions to the respected separate segregated fund through their locals and through geographical and player conferences. Giving is optional, and not a condition of membership. TEMPO does not accept contributions from anyone who is not an AFM member, immediate family member, or AFM staffer. TEMPO has recently established its first commonsense leadership fund. The TEMPO Signature Program provides an opportunity for members who have a strong proclivity for involvement in political action to participate in this unique leadership fund. The fund asks for a onetime lump sum payment of $52 per year, which would equate to $1 per week. Since its inception, more than 100 AFM members have joined the Signature Campaign, expressing their appreciation of the need for a strong political fund that keeps our union in the game. We thank all of our members for their support of TEMPO over the years and we surely appreciate their giving at every level.

Two principal goals of the leadership fund are 1) to build a group of active legislative-political coordinators who will work to mobilize and inform members of our activities at every level of the union and 2) to support a strategy that will help our union gain greater access and influence into White House policy.

At 118 years old, the AFM, as recognized by the United States Department of Labor, is one of the oldest labor unions in the US. Founded in 1896, your union has been the driving force in the development and maintenance of public and workplace policies—actions that have secured your rights as workers. These actions continue today as the AFM helps develop legislation (e.g., the Fair Play Fair Pay Act), and lobbies for tax, labor, and arts policies, while also negotiating with Federal agencies over regulatory change (e.g., musical instruments as carry-on baggage and CITES related issues). The union protects current workplace policies and organizes workplaces of the future. The rules of engagement for these policies are dictated by Congress and your union is there to serve both as your watchdog on important issues of the day and as your daily voice in a place that can undermine your progress in a heartbeat.

AFM leadership recognizes that your need to spend time honing your skills often leaves little time for you to organize legislatively. Thus far, our union has been fortunate to have savvy local officers and members who are willing to take the lead on legislative and political issues. That is why the AFM maintains specialized personnel to interact with legislators and their staffs every day. As long as we are engaged in our profession, there will be a need for a voice in Washington, DC, as well as at the state, local, and municipal levels of government. We are here to manage your needs in that regard so that laws are not developed that would lead to the elimination of jobs or of your rights as workers.

AFM TEMPO spends for political purposes, including but not limited to, making contributions to and expenditures on behalf of AFM’s supported candidates for federal, state, and local offices. Contributions are voluntary, and AFM members may refuse to contribute without any reprisal. Any guideline contribution amount is merely a suggestion, and members are free to contribute more or less, and AFM will not favor or disadvantage a member by reason of the amount of a contribution or a decision not to contribute. Federal law requires the AFM to use its best efforts to collect and report the name, mailing address, occupation, and name of employer of any individual whose contributions exceed $200 in a calendar year. Only AFM members, staffers, and immediate family members, may contribute to AFM TEMPO. Contributions are not tax deductible.