With professional chops way beyond her age, Gina Osmar of Local 433 (Austin, TX) is making a name for herself in her local music market, as well as nationally. Osmar’s vocation began humbly at age three when she “played” a kit made up of empty cans brought home from the family restaurant. She learned basic 4/4 time from her dad, David Osmar, playing along to “Bad Company.” She got a real kit for Christmas when she was six. At age seven, she began drum lessons and was invited to join a church band made up of teenagers.

Osmar says that, at about age 10, was when she “finally” decided she wanted a career in music. “I had been playing at the NewChurch Georgetown for about a year by that time. That’s when I finally said I wanted to do this for a living. Then, we went out and recorded in Nashville. That’s when I started to get serious about it,” she says. 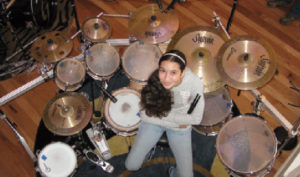 Fifteen-year-old Gina Osmar of Local 433 (Austin, TX) was only 10 when she decided she’d like to have a career in music.

The recording session happened when an independent record company saw a video of her playing “Lonely Night in Georgia” (a half-time shuffle) at her church. They were so impressed with the way she kept time with the singer’s nuances that they asked her to fly out to Nashville to record with some up and coming artists. That was her first paid session “gig” as drummer; she was 11.

At 15 years old, Osmar has now performed more than 500 shows. She has steady gigs at a couple of churches, playing for around 6,000 people almost every week. She performed with the headlining band Forever Starts Today for three shows at last year’s South by Southwest (SXSW) conference, and also appeared at the 2013 and 2014 NAMM shows in Los Angeles.

An AFM member for two years, Osmar was inspired to join after hearing about the benefits from other musicians. “I heard really good things about it,” she says. “It means security, good gigs … there’s a lot of positive about being in it.”

“I’m trying to teach Gina that, ‘If you want this to be big business, treat it like big business,’” says her dad, David Osmar. She doesn’t play for free. “She has done paid studio work from her home studio where she can record top-quality tracks for anyone, anywhere in the world.”

As a student at East View High School in Georgetown, Texas, Gina Osmar keeps a busy schedule. Her favorite sport is softball. She had to cut out basketball and marching band because there wasn’t enough time for that and all her musical activities. She is also learning to play keyboard and guitar, and has done some composing.
Though she doesn’t keep to a strict rehearsal schedule, Osmar says she often spends three hours in her studio when she gets home from school. “Music has always been a part of me, so I always seem to find the time to get that into my schedule,” she says.

Currently in 10th grade, Osmar hasn’t made any definite plans for what will follow high school. “College is one of those things I’m still not sure about.” As for her eventual career in music, she says, “I would love to be a touring artist, or play with a big name artist and tour with them. That would be awesome … or to play on a [television] show like Jimmy Fallon.”

Even with her busy schedule, Osmar makes it a point to give back to others. She’s used her talent to raise money for the homeless, and even donated a drum kit to a village in Haiti two years ago. This February she will play for the Wounded Warriors Foundation. “I think music helps everybody. I like to get involved with people who also love music. A lot of joy comes from seeing peoples’ reactions to the band I am playing with,” she says.

Part of that reaction may come from the fact that she doesn’t “look” like your typical rock and roll drummer. One time a producer recommended her as a drummer to a blues rocker in New Jersey.

“The producer was telling him that he found a drummer … and she’s a girl … and he says, ‘No way!’ and then he tells him that she’s only 14 and he says, ‘Absolutely, no way!’ But then he heard what I could do and he thought it was a pretty good idea,” recounts Osmar.

“It doesn’t really bother me,” she says, rather she enjoys the surprise when they discover her talents. “I would love to see more female artists. Females are often put out [in the music industry] as sex symbols and I would like to see more females that aren’t like that. That would showcase a lot of true talent and personalities.”

Osmar will perform at the NAMM Show again this January. At the show, she will also spend time with some of the equipment manufactures who have endorsed her. She is the youngest Audix microphones artist, and also has endorsements from Pearl, Soultone Cymbals, DC California Drums, AHead drumsticks, Remo drum heads, and Alien Ears in-ear monitors.