In the midst of a four-year negotiation, the musicians of the Richmond Symphony (VA), otherwise known as Symphony Musicians of Richmond (SMOR), managed to keep a positive outlook and give back to the community. By connecting with audience members, working with other local unions, and hosting benefit concerts, more than $6,000 was raised and many new relationships were established.

Most recently, members of SMOR and AFM Local 123 (Richmond, VA) collaborated with area unions to produce a holiday benefit concert. This Holiday Classics concert, held in the International Brotherhood of Electricians Union Hall, raised more than $3,000 for the Holiday Hope program run by the Central Virginia Labor Federation. The program provides Christmas trees, presents and meals for needy families in the community. Local unions, including International Brotherhood of Electrical Workers (IBEW) Local 50; Communication Workers of America (CWA) Local 2201; Bakery, Confectionery, Tobacco, and Grain Millers (BCTGM) Local 358; and International Association of FireFighters (IAFF) Local 995, participated. AFM Local 123 President George Tuckwiller was among the performers. Connecting with other unions proves to be a great way to broaden the base of supporters. 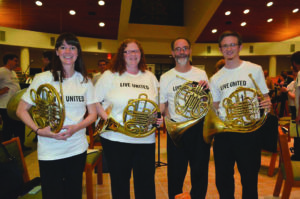 Perhaps the highlight of the year was a concert to benefit the United Way of Greater Richmond and Petersburg. SMOR and Local 123 musicians were led by famed conductor Benjamin Zander in an open rehearsal and performance. The musicians sight-read, allowing Zander to share with the audience the process of rehearsing and bringing an orchestra to its potential. Zander engaged the audience by incorporating themes from his “Classical Fever” TED Talk about the transformative power of classical music, which has had more than 6 million views online. The orchestra wore t-shirts that read “Live United,” creating a casual atmosphere. The event was followed by a “s’mores” themed reception—a play on words with the Symphony Musicians of Richmond acronym, SMOR. This opportunity for lively discussion allowed individual musicians to establish relationships with new supporters. Nearly $3,000 was raised for this event—icing on the cake, or s’more.

In addition to benefit concerts, the musicians performed the National Anthem for the Richmond Flying Squirrels baseball game, began hosting post-concert gatherings such as “Mojitos with Musicians” and deepened their online presence. These proved to be great ways to enhance the concert experience for audience members. Social media has also played a vital role in connecting with the community. Each month a musician is featured with photos from their early years of playing music, putting faces to the names in the concert program book.

In retrospect, you could say the theme of the year was to keep it positive and connect. Especially when negotiating, having the support of the community is paramount and the symphony musicians of Richmond managed to make great strides in building a support network, while raising more than $6,000 for worthy causes.