On April 13, I had the honor of joining members of Congress Jerrold Nadler (D-NY) and Marsha Blackburn (R-TN), many well-known musicians, AFM President Ray Hair, and Local 257 (Nashville, TN) President David Pomeroy to introduce HR 1733, the Fair Play Fair Pay Act of 2015. This federal legislative protection has been a long time coming, and would have a great effect on our members in greater New York, and throughout the country.

It was one of the best introductions of a bill you’ll ever hear about. Local 802 (New York City) members Elvis Costello, Rosanne Cash, “Blue” Lou Marini, Marvin Stamm, Marc Ribot, and many more, made impassioned cases for this important bipartisan legislation, which gives musicians and other performers the simple and undeniable right to be compensated for their creative product and hard work. As Cash said about our next generation of musicians, “If they can get paid, they can continue to create music. I don’t want that generation to disappear because they can’t pay rent.”

The Fair Play Fair Pay Act would make pay fair for music creators and session musicians on all types of radio platforms, most importantly ensuring that AM/FM radio pays the artists whose sound recordings it plays. It also provides a performance right (royalty) putting an end to digital services’ refusal to pay artists for airplay of music made before 1972. This would bring AM/FM (terrestrial) radio in line with the standards held by Internet radio, eliminating the free ride in the form of billions of advertising dollars broadcasters make on the backs of artists. 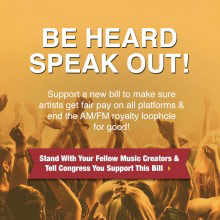 Terrestrial radio is also getting a free ride in the digital space, which allows them to exploit music creators, while making money off of them. Small radio stations are protected by this legislation; local AM/FM stations with annual revenue below $1 million would pay just $500 a year, while public, college, and other noncommercial stations would pay only $100 a year. Religious radio, talk radio, and incidental uses of music would not pay any royalties at all. AM/FM radio must be held to same standards as their competitors, and we must tell our elected officials to support these efforts to make musicians whole.

It is extremely important that all of our members support Fair Play Fair Pay and join the campaign that the AFM has been working on with the musicFIRST Coalition to help make that happen. Log onto musicFIRST’s website (musicfirstcoalition.org) to find out if your federal representative supports the bill. If not, encourage him or her to sign on to HR 1733 as a co-sponsor. If they don’t support it, ask them why. Local 802 recently sent a letter urging Representative Charles Rangel (D-NY) to sign on. Rangel unfortunately signed onto H Con Resolution 17, an anti-musician bill pushed by corporate broadcasters and their terrestrial stations that wrongly claims that paying music creators is a “tax.” We have yet to hear a response, but we intend to follow up.

When it comes to federal, local, or state legislation, locals have to do the heavy lifting and a thorough job spreading the word to our members and encouraging them to take immediate action. This is how real change is made; we have to keep moving the ball forward. Go online now and send a message, or call your member of Congress and start a dialogue. If you do it as a group, that’s even better. This is proof of the effectiveness of our strength in numbers—without our involvement in this issue (and many other issues) no one would know about the importance of musicians getting what is owed to us: fair compensation for our hard work.