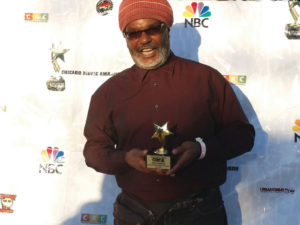 Last summer Stann Champion of Local 10-208 (Chicago, IL) was recognized with a Lifetime Achievement Award for his contributions to his community through music.

Stann Champion of Local 10-208 (Chicago, IL) has dominated Chicago’s vibrant Caribbean music scene for 30 years. His band, Roots Rock Society (RRS), has cultivated a wider community audience by redefining the performance venue and connecting with people where they live—in schools, cultural centers, colleges, churches, and sports venues. Champion says, “We are a movement committed especially to reaching young people of all cultures with our message of mutual respect for one another and learning through music.”

“This music chose me back in 1978,” says Champion. He was recruited in 1980 by the reggae band, Gypsi Fari, for a recording project at Bob Marley’s Tuff Gong studios in Jamaica. Champion explains, “At the time, very few Chicago musicians could play reggae and other island rhythms.”

As a child, Champion was already exposed to a rich collection of American and island roots music. “We grew up in a black cultural environment listening to a wide range of artists like Miles Davis, Harry Belafonte, Mariam Makeba, Trini Lopez, and Ray Charles,” he says. “I started playing guitar and listening to B.B. King and rumba and flamenco.”

Champion got his first guitar at 13 years old and studied the sounds of Chuck Berry, Wes Montgomery, Albert King, The Beatles, and Bo Diddley. “The first song I learned was blues. I wanted to learn anything on a six-string,” he says. A gifted child, he attended the art education program at The Art Institute of Chicago from 10 years old through high school. And during his tenure at Columbia College Chicago, art was his focus.

“In my home, it was important I finish college, since I was the first in my family to do so. But I still maintained my passion for the guitar and continued to play,” he says. Champion was on a path bound for a career in commercial art. After a trip to the Caribbean where he experienced roots music in its most authentic form, he returned to Chicago with a different mindset. He says, “I could have continued on to a ‘Madison Avenue’ type of advertising career, but I chose to use my talents, my drive to create and advance positive change for the greater community around me.” For Champion the decision paid off.

He formed Roots Rock Society in 1986 and they began touring with top-flight reggae bands such as Steel Pulse, Third World, Culture, Burning Spear, and Gil Scott-Heron. Along with the traditional reggae fare, the group performs calypso, samba, soul, and zouk. Champion explores writing songs in Swahili, Amharic (the official language of Ethiopia), French, and Spanish.

In the tradition of Jamaican activist Marcus Garvey and his movement, Champion, who has been a member of the union for 15 years, says this is his life’s work. “It’s about uplifting our community with culture, knowledge, and reaching one’s goals—which were not part of life as a slave. I find this same hunger in all communities. It is my duty to use my gift in a positive manner,” he explains.

He and his band are deeply committed to issues of peace and social justice. Champion, who also hosts a radio show says, “We work in schools, hospitals, churches, and community events. It’s all about compassion and tolerance, messages passed along from the African diaspora.” Each summer, he spends time working on Chicago’s south side, where campers learn the roots of instruments, storytelling, and songwriting. The band conducts education workshops throughout the community to promote awareness of hunger and homelessness, and Champion runs a weekly workshop, CampChamp, at Arthur Ashe Elementary.

Among his numerous awards, Champion has been honored by Chicago Police Department and the Chicago Music Awards a dozen times, including Best Calypso and Soul Calypso Entertainer, Best Gospel/Spiritual Band, and last summer he was given a Lifetime Achievement Award for his contributions to the music industry and to the community.