Home » Organizing » St. Louis’s Muny Theatre, One of the Most Important Musical Theatres in America


St. Louis’s Muny Theatre, One of the Most Important Musical Theatres in America 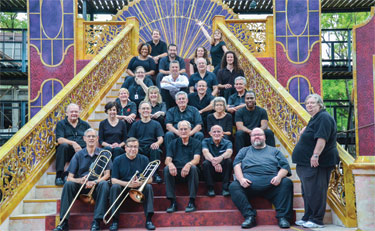 The largest and oldest outdoor musical theatre in America started out in 1916 as a grassy little spot between two oak trees. Clear away some shrubs and small trees here, build a retaining wall there, and voilá! Such was the humble birth of The Muny Theatre in St. Louis, Missouri. Ninety-eight years later, The Muny seats 11,000 and employs close to 1,000 staff members annually for its renowned summer musical series.

The theatre is situated in Forest Park, which engulfs an area 50% larger than Central Park and comprises three museums, a zoo, a golf course, restaurants, and much more. With these attractions, The Muny forms a constellation of culture that’s part of the city’s identity. Music has always been especially important to the people of St. Louis, says Laura Peters, Muny marketing director and director of archives. The theatre’s success is a testament to that.

For the musicians of Local 2-197 (St. Louis, MO) who perform in The Muny Orchestra, the summer musicals are exciting, challenging, and never boring. The breakneck performance schedule lasts seven weeks each summer, with daily performances (excluding one or two days off for holidays), and a new musical each week. The actors—many of which come in from New York and other cities—get 11 days to rehearse their parts for the musical, but the musicians only get about three rehearsals to learn their parts for upcoming shows.

“You rehearse the music for an upcoming show during the day, and you perform a different show that night,” says Tova Braitberg, Local 2-197 member and concertmaster for the Muny Orchestra. Braitberg points out that this is more demanding than on Broadway, where musicians have more time to prepare for each performance. 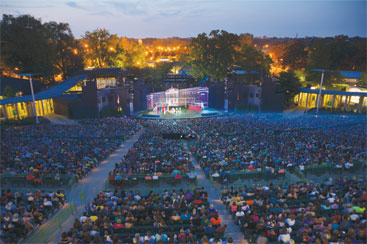 In addition to the demanding schedule, playing at The Muny poses other challenges that go along with playing outdoors in the summer. It’s hot; your hand gets sweaty and wants to fly off the fingerboard; flies are attracted to the music stand light; and if it rains, you’ve got to rely on your stand partner to balance an umbrella over your head, says Braitberg. Despite all this, she is grateful for the opportunity to play with people of such high quality.

“The shows are just wonderful,” says Vicky Smolik, second trumpet in the Muny Orchestra and president of Local 2-197. For any given performance, the pit consists of 25 to 30 union musicians. For some of them, The Muny was an early inspiration that helped set them on the path of a career in music.

Braitberg’s father, mother, and uncle all played in The Muny Orchestra, and she remembers attending the shows as a child. “As young as I can remember, musical theater has always been in my blood.”

Some musicians like playing here so much that, even after they’ve moved to another city, they’ll return each summer for the opportunity to perform, Smolik says.

The Muny is capable of bringing performances to life in a way that smaller indoor theatres simply can’t. “Broadway couldn’t fit the sets we’re able to have, because of size,” says Smolik. She recalls a giant ship constructed for the performance of Titanic, and actors flying around on wires for performances like Mary Poppins and Peter Pan.

Since the summer musical season lasts only seven weeks, Muny musicians will play other gigs and work other jobs during the winter—but nothing compares to the magical chaos of playing at The Muny.  “Muny is the big push for us, and we all look forward to it each year,” says Smolik.

“Try to imagine the most beautiful music you’ve ever heard,” says Braitberg. “Then imagine it 100 times better. That’s what it’s like to play it, and be part of it.” 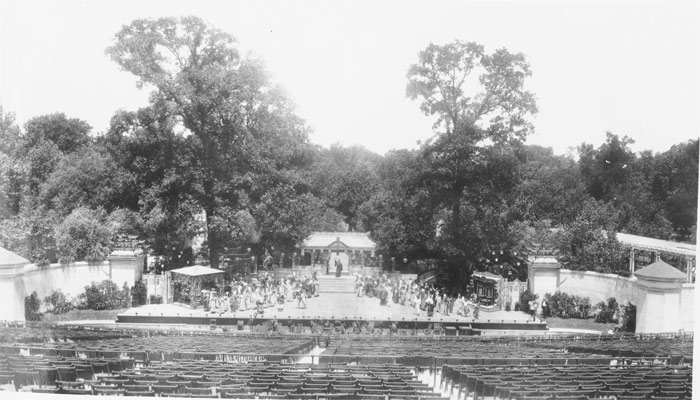