Home » Legislative Update » The SphinxConnect Phenomenon: Leading with Intellect to Advance the Value of Inclusion


The SphinxConnect Phenomenon: Leading with Intellect to Advance the Value of Inclusion

For the past 20 years, the Sphinx Organization has played a quintessential role in moving the US, and in some instances the global cultural community, toward a more enlightened future that exudes cultural inclusion. The moral and philosophical underpinning of the artistic institution’s work proves that the payoff of inclusion far outweighs the “poison pill” of cultural exclusion. The achievements of this organization’s leadership, grounded in strong musical and philosophical reinforcement, prove to supporters and funders alike that diversity brightens the latent moral groundwork upon which classical performance can grow.

In his opening remarks, Sphinx founder and director Aaron Dworkin took the more than 500 registered SphinxConnect participants through the matrix that formed the basis for his initial journey in founding the organization. Combining his philosophical framework with his multicultural background, he saw that his pathway to success, and the pathway for hundreds of other young minority artists, didn’t lay solely in the thirst for recognition of their abilities to perform successfully. He saw the need to shine a light into a dark tunnel fraught with twists and turns. In doing so, he knew there were likely obstructions, not yet evident, which he would confront in the unexplored passage into an uncertain future.

Recognized as an international speaker and social entrepreneur, Dworkin has now significantly, if not fully, executed his journey. He continues to rely on his faith that well-trained young artists, regardless of background, when given the right tools and motivation, can perpetually hold their own. By surrounding himself with strong, forceful advocates of his project and people trained to exact his high standards, Dworkin is able help committed young performers and institutions lift the talents and human spirit of young artists of all socio-economic backgrounds. 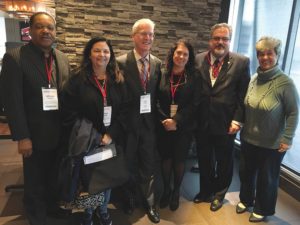 With this philosophical foundation driving Dworkin’s efforts, the 2018 annual SphinxConnect gathering was clearly designed to give participants a measure of confidence in their performing and networking ability, as well as to act as a forum to express their inner most concerns about successfully navigating the symphony world. Dworkin lays out a tangible philosophical and artistic path toward a life-changing journey.

I represented the AFM at SphinxConnect, along with Director of Symphonic Services Rochelle Skolnick, ICSOM Chair Meredith Snow, ICSOM President Paul Austin, AFM IEB Member and Local 802 (New York City) President Tino Gagliardi, and AFM Diversity Committee Member and Local 5 (Detroit, MI) Secretary-Treasurer Susan Barna Ayoub. Skolnick also served as a panelist. There were many AFM members in attendance. The workshops and panels set the stage for enhanced skill building in performance and teaching, developing a clear artistic vision, building careers around adventuresome instrumental platforms, defining a musician’s mission in the community, understanding politics and policy in the arts, and entrepreneurship. The presentations reflected how artists should hold themselves accountable in the dynamic and constantly changing music environment. Last, but not least, participants learned the value of networking, and when necessary, how to speak truth to power.

From the 2018 attendance record, it was obvious that the Sphinx “phenomenon” has a steadfast following. Its participants look forward to attending every year. The event makes a profound statement about inclusion and the need to move the ball forward on symphonic career opportunities. From the point of view of this director, AFM 2018 SphinxConnect participants and representatives, and members of the AFM Diversity Committee, our organization is set to bring vital resources and advice to help make a positive difference.