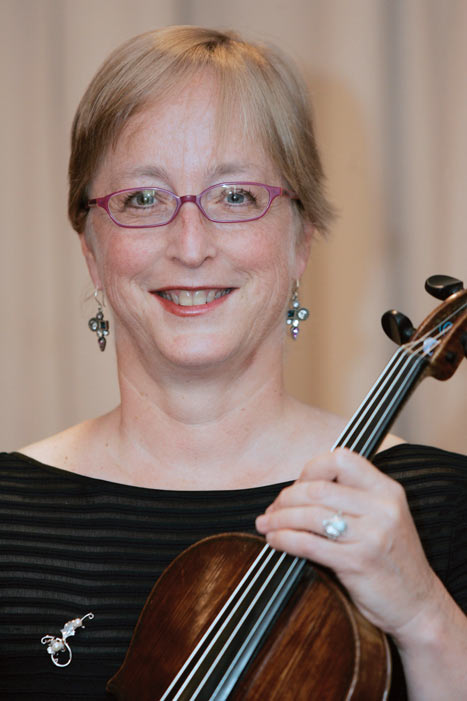 Dawn Hannay of Local 802 (New York City) looks back on her career and activism as a violist with the New York Philharmonic.

Dawn Hannay of Local 802 (New York City) practically grew up on the stage of the New York Philharmonic. Having joined at 23, in 1979, the violist was one of a handful of women performing with the orchestra at the time. Now comprising more than half women, the oldest ensemble in the country is steeped in history and tradition. Hannay, who retired from her position last October, says she learned quickly, “I was always a bit of a rabble rouser so it wasn’t long before I was elected chair of the musicians’ committee.”

Back then, for an “inexperienced young woman,” there was a learning curve. Hannay explains that in those days music schools did little to prepare string players to master the overwhelming orchestral repertoire. “You had to be a great sight reader and fast learner,” she says, remembering the first time she played Ravel’s Daphnis and Chloe suite in Studio 8H at NBC with the mics on, no rehearsal. “It’s like jumping on a speeding train. You have to be tough, especially as a young and very naive woman in what in those days seemed like a good ole boys club, complete with poker games, chain smoking, and even occasional fisticuffs!”

Hannay inherited the torch from those older and more experienced musicians who had fought so successfully to improve the lives of orchestral musicians. She says, “I took on the challenge, and spent decades doing my utmost to improve the working life of my colleagues, negotiating contracts and helping to resolve disputes.”

“The union is crucial in maintaining fair wages and working conditions for all musicians. Younger musicians who prefer to remain independent need to learn the history of their business, and how essential the union is in ensuring that musicians could earn a living from their craft. It is easy to take for granted the 52-week season, health benefits, and pension that we enjoy today,” she says.

What distinguishes prestigious orchestras like the New York Philharmonic from the Vienna Philharmonic? She says it’s “the communication between older players and the next generation. There are many traditions of phrasing and tempi, of fingerings and articulations, of tone quality and bowings, and even jokes that are handed down, such as applauding in rehearsal at the false ending in Tchaikovsky’s Symphony No. 5.”

Hannay explains that a wise conductor lets an orchestra play, shaping his or her own interpretation, but allowing the unique character of the orchestra to shine through. She says, “There may be fewer than a dozen musicians left in the orchestra who played West Side Story under Leonard Bernstein, but they still play the score like nobody’s business. That’s tradition.”

Not long ago, playing in an orchestra was among the most precarious of livings. Hannay explains, “It’s almost unheard of nowadays in any profession for people to stay in a single job for 30, 40, or even 50 or more years. It’s the norm here. We owe this extraordinary stability to a whole generation of musicians who fought to make it so. Their work created the continuity that enables the unique musical traditions to be carried forward from generation to generation. Through the efforts of the past generation there are contracts and fair wages.”

Hannay performs chamber music, appearing often with the New York Philharmonic Ensembles. She spends the summers in Jackson Hole, Wyoming, playing with the Grand Teton Music Festival, where she is a founding member of the string quartet Wind River 4. In 2001, she was a featured soloist and guest principal viola with the London Chamber Players on a tour of South Africa.