Shedding Light on Federal Attacks on the American Working Family

If ever there was a time for workers, including musicians, to get engaged in the movement to protect jobs and benefits that promote healthy, secure workplaces and families, now is the time.

While many Americans have been distracted by the bevy of negative news reports focusing on political agendas, Congress has been busy introducing legislation that would unhinge the fundamental protections now in place for workers, leading to the loss of jobs, pensions, union security agreements, public school education, as well as workplace safety and security. These changes are focused on both the public and private sectors, relating to the work people in your communities do to provide basic services.

In the first two months of the 115th US Congress, legislation has been introduced that, if passed, would negatively change your way of life. Though much of this directly impacts this nation’s 2.1 million federal workers (confirmed in a February 9 Washington Times news article), the message it sends is that workers in both the public and private sectors are at risk of losing hard fought federal labor protections. 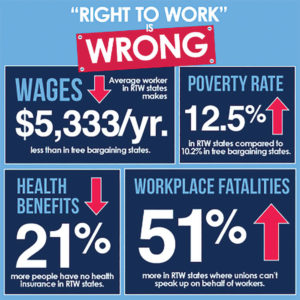 Let’s start with our brothers and sisters in the public sector. The focus on federal agencies, hence their employees, has centered on union activity protected by law. First and foremost is the attack on “official time.” This is legal activity protected by law that allows union officials to perform legally sanctioned representational work while on the federal clock. HR 1364, the Official Time Reform Act of 2017, would limit the amount of time union volunteer officials take to perform representational work. It would also, in some cases, cut pension accrual for time spent doing that same union work while on the job, thereby making such volunteer work less attractive to union volunteers. The bill would have a chilling effect on union volunteer representatives who seek to protect worker’s rights on the job in the federal workplace.

Next, is the attack on the Environmental Protection Agency. This new legislation would eliminate health and safety regulations that effectively protect everyone in this country. An example is the Dakota Pipeline Project in which unregulated drilling would place rivers and other natural habitats in severe jeopardy, if the pipeline is damaged. This, of course, would result in catastrophic disaster that would never fully correct itself, not to mention the harm it would do to Native American territories that depend on a clean environment.

Attacks on Veterans Administration (VA) employees have taken a new turn. By refusing to recognize that poor management was at the center of the VA’s problems, HR 1259 attacks front-line workers and eliminates jobs that are necessary to guarantee the good health and safety of our veterans. If fewer veterans have access to care, where will they turn?

AFL-CIO Legislative Representative Byron Charlton, a 30-year veteran of AFL-CIO policy issues relating to federal employees, sends a clear message to all in the labor movement: “To thyself be true.” If working people are displaced/laid off in large numbers, who will be there to support community organizations, local music festivals, the symphony, and student music and arts programs? When family budgets take a hit, people don’t go out and don’t spend money on entertainment nor arts education for their children.

So, why do federal employees matter so much to musicians? As workers, we are all in the same fight for survival. Musicians, like federal workers, steelworkers, teachers, boilermakers, telephone technicians, flight attendants, pilots, and railway and other transportation workers, are all subject to the effects of policies targeted at weakening job security. We must see ourselves as team players and come together to support each other’s causes. Sitting on the sidelines is not an option in this current legislative environment.

Finally, the foundation of this attack on labor is rooted in the fundamental principle that unions are jaded and always operate in opposition to ultra-conservative principles. The legislation discussed here is but the tip of the iceberg for the 115th Congress. As discussed in my March IM article, the basic foundation of this anti-union animus is HR 785, the National Right to Work Act. As noted earlier, this bill prohibits union security agreements and is designed to give employers leverage to exploit workers by preventing them from forming and joining unions.

All these policies and more are making their way through the US Congress, while the American public’s attention is diverted by partisan political jousting. It is incumbent upon us to engage with our brothers and sisters in the movement so that other workers will be around when we need them. AFM local officers are engaged in state federation and central labor council actions designed to allow us to work together on these issues. We ask that you take a moment from your daily routine to support a public employee campaign. Bring a colleague and carry a sign. The workers you support will remember your commitment, and when the far right come after us (for example, cutting the National Endowment for the Arts, Corporation for Public Broadcasting, State Department cultural programs, etc.), they will be there to help.