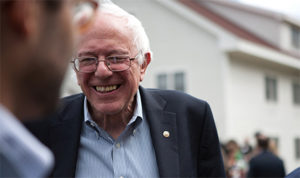 Democratic presidential candidate Senator Bernie Sanders introduced a bill last week that would make is easier for workers to band together and demand better pay and treatment. “Right to work” laws are the right-wing’s favorite way to eliminate the power of unions. Sanders bill, the Workplace Democracy Act, would make “right to work” a thing of the past, no longer allowing states to pre-empt federal labor laws. It  would rectify current laws that deny American laborers the right to elect people to represent their best interests and negotiate the “terms and conditions of their employment or other mutual aid or protection” on their behalf. Sanders would like to make it easier to form a union, including eliminating the current two-ballot process.

The bill would also make it harder for corporations to take advantage of vulnerable, unprotected workers in countries like China. Under Sanders’ bill, employees of US companies in other countries could file labor complaints against the company if they were treated unfairly.