This will be my final International Musician column as leave office August 1. I wanted to thank the many people who have supported me over my six-year tenure as secretary-treasurer of the AFM.

From my very first day in office, Executive Secretary and Union Privilege Liaison Nadine Sylvester kept me on the straight and narrow and never forgot anything. She was always good to put things on my iPad and my Kindle large enough so that I could read them. Nadine, I love you and your family, thank you!

Supervisor/Claims and Cases Diane DePiro, thank you for all you do. When Lou Mancini left, Diane took on a lot of his work and has done a wonderful job.

Information Systems Manager Walter Lopez is always coming into my office saying, “We need to do this; we need to do that.” We’ve completely redone our New York Office hardware infrastructure and substantially finished upgrades in the Canadian Office in Toronto. Now the big job will be the West Coast Office in Los Angeles, where we are preparing to collect $40 million for our members. That’s going to be a major effort; we are going to have to set up a bigger collection office.

While we work to collect monies for our members and strive for better working conditions, I don’t ever want this union to lose sight of the social issues. We are nothing if we don’t work for social issues. There is one area that I think that we could do a little better in and that’s working with the Americans with Disabilities Act. I have a personal interest in blind musicians. Please help those musicians who have low vision or no vision—they need our help. They need to have the opportunities that everyone has. Put them on your gigs and give them those opportunities.

Finally, I would also like to talk about the IM and thank all of the people who work on the IM. I get on a plane and I see our members reading the IM. (Of course, I can tell right away if they are symphony musicians because they go to the back audition ads right away.) I would like to update members on the June 23 report of the International Musician committee at the AFM Convention. 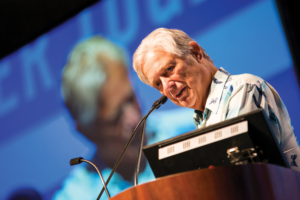 Here, in part, is the IM Committee’s report:

A number of years ago, the IM reinvented itself from a newsprint publication to one with glossy covers featuring prominent AFM members, with articles that included why these musical stars joined and remain AFM members. At the 2013 AFM Convention, the IM Committee recommended that the IM increase its electronic exposure, including enhancing the website, and increasing
its social media presence, optimized for mobile devices.

We also recommended exposure at musician and music conferences, such as the NAMM  tradeshow. Most of this has been successfully and professionally accomplished. The IM has its own website, InternationalMusician.org, as well as social media accounts.

Through a variety of means, the staff has been able to accumulate contact information from site visitors that enables them to promote the AFM to a wider audience of musicians. Increased exposure has also led to increased ad revenue. The website has now paid for itself in ad revenue, and so future revenue will be profits towards supporting the IM or other AFM projects.

The Committee noted that paper copies of the IM continue to be important. Not everyone reads the multitude of electronic mail received daily. Copies of the IM lying in local offices are immediately spotted by visitors and prospective members, and many members still prefer to read paper over electronic versions.

Organizing Director Paul Frank spoke about the importance of organizing freelance musicians. The IM staff has additional ideas for increased AFM exposure. With its experience in brochure, magazine, and video design and production, it can offer the AFM even more avenues of exposure to the musician community at-large, helping to create greater awareness of our existence and our importance to musicians. Many of these new projects could be created and run completely on ad revenue, with no extra expense to the AFM.

As the IM has moved further into the electronic realm, so has the AFM in general. The AFM’s IT staff has done a makeover of AFM.org, including a mobile device version. Local membership databases and reporting tools are an important part of this, as well the availability of documentation and contracts downloadable by locals and members.

The committee noted obvious strengths of each. For instance, AFM.org has the data, tools and functionality needed to allow the AFM and its locals to communicate, report, and generally conduct business with each other. InternationalMusician.org, on the other hand, is the face of the AFM to its members, the public, and the professional musician community; it’s a smart, slick site helping to draw musicians in and point them toward AFM membership.

However, the continued expansion of both the IM and the AFM into the digital realm has led to some duplication of effort and content, as well as the potential for conflict of goals and objectives. Therefore, the International Musician Committee makes the following recommendations:

The Secretary-Treasurer and the IEB should create clear goals and objectives for the IM, keeping in mind current and future possibilities for membership communication, recruitment, and public awareness in the professional music community.

The IEB should meet with the AFM’s departments to discuss how each might best make use of the IM and
InternationalMusician.org to achieve their goals.

The IEB should explore, perhaps through a committee of selected IEB members and local officers, the strengths and weakness of both InternationalMusician.org and AFM.org, noting how each is best suited to fill the needs and goals of the membership and departments of the AFM, so that the two sites work together in a complimentary and collaborative way.

AFM.org and InternationalMusician.org users should be able to easily cross back and forth between the sites and other social media, thus increasing traffic, awareness of the AFM and its benefits, as well as increased ad revenue.