RVs and Elephants: Life Behind the Scenes for Ringling Gold Unit Musicians

While any professional performance career is at times a circus, only a few AFM members can claim that is literally true. Touring nearly year-round with one of three Ringling Bros. and Barnum & Bailey (RBBB) circuses—the Red, Blue, and Gold units—makes for a uniquely strange and wonderful musical career.

On tour since January 2004, and featuring a band of six, the RBBB circus’s Gold unit gave its final performance October 25. Working under an agreement between the AFM and Feld Entertainment, this production operated as a “truck and trailer” show that played smaller, more rural markets. The standard model for housing and transportation used on the Red and Blue units—the circus train—was not an option for the Gold unit. A carefully negotiated policy allowed musicians to travel in company-funded RVs, which served as both their transportation and lodging. In addition to many travels across the US and Canada, the Gold unit was the only RBBB production to travel to Puerto Rico and Europe. 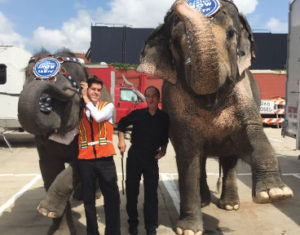 Conductor and saxophonist Robbie Redding left college to take a full-time saxophone position with RBBB in 1995. After playing in a couple different circus bands, he was asked to be conductor of the brand new RBBB Gold unit.

“Everything about the Gold unit is unique—the housing, the cities played, the performance schedule, the family atmosphere, and the historic moments we created for Feld Entertainment,” says Redding. “When you’ve been a part of something new and unique from the beginning, there isn’t much you won’t miss.”

“Live music is the heartbeat for a circus performance. It fuels circus artists to perform better, and vice versa,” he explains. “I’ve often described Ringling employment for the musician as a ‘blue collar’ music job. The book stays relatively the same—there is very little room for creativity.”

Free time can be a killer, he says of touring life. For that reason, the musicians take on other projects, including two successful side bands (Jack’s Shadow and Greybag) that they booked to play gigs in cities where the circus performed.

Redding says the RV housing scenario was both an Achilles’ heal and a godsend. “It made it difficult to find musicians willing to take the job. On the other hand, those that embraced the idea know there is no other way to tour,” he says. In 12 years, he’d had to replace less than 10 musicians in the six-piece, full-time, touring band.

Keyboardist Matthew Cross had retired from circus life, but returned for the last two months of the Gold unit tour to replace a keyboardist who left. He had performed with six different circuses from 1979 to 2014. “What an adventure! I wouldn’t have traded it for anything in the world,” he says. 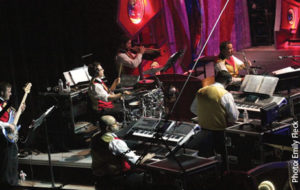 Daniel Glynn, played electric bass for the show for about five years, after he stumbled across a Ringling Bros. audition call. “I think as soon as I stepped into the tent, saw my first elephant, and met all the band guys, I was in it for the long haul,” he says. “The idea of living in a movable community on the road was appealing.”

“I am going to miss the overall ‘circus life’—countless nights spent sitting outside someone’s RV telling and retelling circus stories, and the cast of characters from so many different countries and cultures,’” says Glynn.

He says that the circus performers kept them on their toes, “Each section of music was specifically written to enhance the actions of performers. It’s an ebb and flow relationship. Jeremy Papay, our drummer, and Matt Cross, our keys one player, are amazing at ‘catching tricks,’ which highlight the movements and actions of performers.”

Though Glynn says he won’t miss breakdowns in the middle of nowhere, he did enjoy having his own space. Plus his rolling home allowed him to bring additional instruments and recording equipment.

When drummer Jeremy Papay was first asked to audition for the circus band he thought it was a joke. “I had a couple weeks to learn the show, buy an RV and truck, learn how to hitch and unhitch the thing, and hit the road to meet up with the show in Prescott Valley, Arizona (leaving from Pittsburgh).

“Live music is everything, especially in the circus,” he exclaims. “Circus musicians are no joke. I have learned a lot from these fine gentlemen. Canned music is unable to smoothly and seamlessly stop on a dime and transition when acts miss a trick, decide to cut a trick, or add one, two, three, or four.”

“As a circus drummer, I was responsible for ‘trick catching’—accenting the action in the ring with little fills and flourishes. In addition, I was responsible for triggering an absolutely insane number of loops via the [Roland] SPD-SX [sampling pad]. It was a challenge to keep my eyes on the ring, watch the conductor for cues, keep the tempo steady, and keep an eye on the SPD-SX.”

Though having an RV was a perk, it was at times grueling. “Anything under 500 miles feels like a vacation drive after crunching some of those Gold jumps—500 to 1,500 miles plus. Playing drums was only part of the gig!” he says. Hazards of RV life included blown tires, tornado and hurricane warnings, sub-zero freezes, record breaking heat, and floods.

Gabriel Romero Jr. has worked as keyboardist, synth programmer, and assistant conductor for all three RBBB circus units. “The Gold has always been a tighter-knit community; definitely a second family to me. I will miss it dearly,” he says.

“In a live show, especially a live show with animal acts, it is very important that the music fit the act,” he says. “It is rare that an act is the same every time. A live band helps make any last-minute changes or mishaps on the floor appear intentional and seamless.”
Traveling by RV gave him the opportunity to have a studio on wheels. “That’s something I couldn’t do on a train. We were able to record a full-length album, strictly in our RVs,” he says.

Keyboardist Oliver Townsend was the newest band member, having joined June 2014. He chose hotel life, rather than travel by RV. “I’ve always enjoyed touring with theatre shows,” he explains. “So it seemed like a fun alternative to that. It was an almost identical lifestyle for me, but with a totally different work environment!” He says the players shared a unique bond.

Townsend will miss the people and the work schedule the most. “You can’t really beat the paycheck/work ration—union wages for three to four days of work per week,” he says, admitting, however, that he won’t miss three-show Saturdays and some of the rundown arenas.
Band members hope they’ll be able to keep the sideband Greybag (greybagmusic.com) going in some capacity. The music for its first album, Never Meant to Stay, was recorded in their RVs. 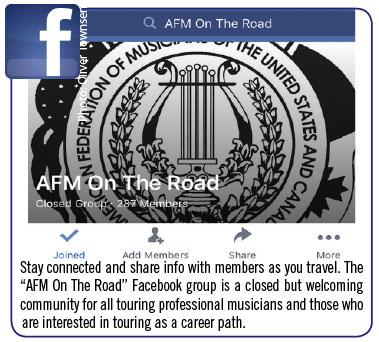