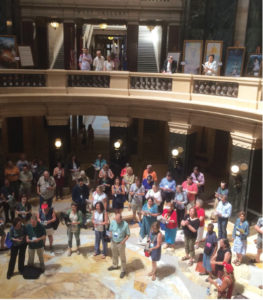 Most of our Regional Orchestra Players’ Association (ROPA) orchestras have gotten back to work over the past several months. There are lots of side letter agreements, contract extensions, and COVID protocols to deal with. I expect the next year will be full of negotiations and rollbacks of COVID protocols as we continue to return to live performing. There will likely be a new “normal” for our concerts and way of doing business, having been affected by two years of the pandemic, Zoom, streaming, and the many other adjustments that had to be made to keep the music going. There will need to be a great deal of patience and understanding for everyone as the playing field for many of our orchestras may well have changed.

Earlier this spring it became apparent that the Regional Orchestra Players Association (ROPA) conference would be held virtually for a second year. We considered the impact of the COVID crisis on our orchestras and the resulting financial hits our musicians and locals had taken, as well as the hesitancy of many of our members to […]