Retiring COO Mancini Reflects on His Years at the AFM

Lew Mancini has worked for the AFM for 40 years. In its 120-year history, the AFM has had 12 presidents. Mancini has been on staff during eight of those administrations. His retirement in December 2015, marks the end of his long tenure for the AFM and the services he provided to the offices of both the president and secretary-treasurer.

Barbara T. Owens: How did you get your start as a musician?

Lew Mancini: Influenced by the love my parents had for the accordion, I started taking lessons when I was eight years old. This was not exactly my instrument of choice back in those days (I wanted to play drums), but ultimately it served me well, performing casual, society-type gigs while in college. I joined Local 248 (Paterson, NJ) in 1967, influenced by the union consciousness of my father who had lengthy membership in the Teamsters Union.

BTO: Did you major in music in college? 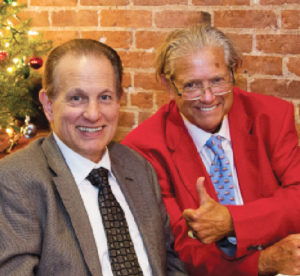 Lew Mancini (left), pictured here with AFM Secretary-Treasurer Sam Folio, started working for the AFM in 1969 while still in college, and is now a 40-year veteran in the Federation’s New York City office.

LM: Although I did take courses in music and music theory, I was actually a natural science enthusiast, with particular interest in the field of meteorology. I also focused on a course of study in social sciences.

BTO: How did you begin your career with the AFM, and how has your job evolved over your 40-year career?

LM: I worked during the summer months of 1969 and 1970 doing generalist/clerical work within the Federation’s New York headquarters. The AFM President at that time was Herman Kenin. Although still uncertain of my career direction, I began full-time employment in 1971 under the administration of President Hal Davis. My initial duties involved supervisory activities within the AFM’s Booking Agent Department. Elevated to the title of assistant to the president in 1978, and under then-President Victor W. Fuentealba, the Booking Agent Department was expanded to include immigration and touring theatrical. I was recruited by Walt Disney World in 1989 to assume a management role within its creative entertainment division. At the conclusion of that five-year term with Disney, I was recruited back to the Federation by AFM Secretary-Treasurer Steve Sprague to fill the role of assistant secretary. In 2010, I was honored to be elevated to the position of chief operating officer, an expanded role that included liaison to all Federation departments and the day-to-day operations within the Federation’s headquarters.

LM: In the 1980s, I, along with staff members Pat Varriale and Dennis Dorry, assisted Convention Coordinator Bob Crothers. In looking back at conventions during that time, they seemed a bit simpler, less demanding, and less detailed. Over the years, we have witnessed an increase in meetings during the convention by the various committees and player and regional conferences. We have greatly expanded catering and other ceremonial and entertainment elements as well.

BTO: I’ve looked at the old volumes of convention proceedings. It’s hard to imagine a time when everything was recorded manually!

LM: We went from recording the events with pencil and paper to audio cassettes. I have memories of a box full of audio cassettes, side A and side B. How would we even listen to them now? Thankfully, CDs replaced those cassettes a few conventions ago. We have become much more tech savvy now; witness 2013 when live streaming from the convention floor was implemented.

LM: My tenure notwithstanding, I am amazed at the longevity of some of the local officers. Their dedication to the membership and their love of music—and for many with minimal compensation—cannot be understated. It has been an incredible experience chatting with them, learning from them, and cultivating friendships.

BTO: Another integral part, which contributes to the efficient functioning of the AFM, is the staff. How has the staff evolved over your years in the New York office?

LM: The current staff is smaller than years past, but their level of work remains high. The number of staff members with lengthy terms of employment is impressive. I believe the formula for success is teamwork and I am proud to have been a part of the AFM staff team.

BTO: As the AFM looks towards its 100th Convention, what are your thoughts?

LM: The decision to step down after decades of service did not come easy. I am proud of my accomplishments along the way, for being driven to meet the challenges I faced, and always striving to make a difference. I could not have carried out my duties without support from both staff and officers.