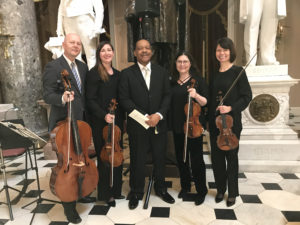 Eastman School of Music Alumni String quartet comprised of members of AFM Local 161-710, under the leadership of AFM 161-710 President Edgardo Malaga and Secretary-Treasurer Marta Bradley, performed the prelude and postlude at the US Capitol Sanctuary Hall April 18 for a Congressional Memorial Ceremony for the late Honorable Louise Slaughter (D-NY). Representative Slaughter was co-chair of the Congressional Arts Caucus, a tireless friend of the arts, and a longtime personal friend of the AFM. It was her tenacity, with the help of the Arts Caucus, that kept federal funding alive for the National Endowment for the Arts, National Endowment for the Humanities, public school music programs, as well as full funding for the Corporation for Public Broadcasting. She was responsible for making the arts available to every American through her work with the 161-member Arts Caucus. She also served as a ranking member of the House Rules Committee.