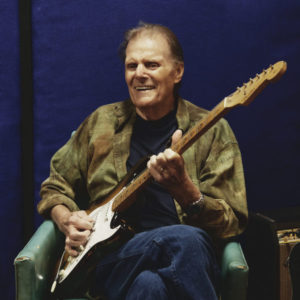 Few session musicians can lay claim to the deep roots of Reggie Young. Among guitarists, he is revered. His instinct for phrasing has consistently rendered artful licks mimicked by hundreds of other players. The now 80-year-old musician of Local 257 (Nashville, TN) crafted some of the most famous guitar riffs in history. Dobie Gray’s “Drift Away,” James Carr’s “Dark End of the Street,” Local 47 (Los Angeles, CA) member Neil Diamond’s “Sweet Caroline,” Dusty Springfield’s classic “Son of a Preacher Man,” and Elvis Presley’s comeback hit, “Suspicious Minds.” The list goes on.

In the 1960s and early 1970s Young and the rhythm ensemble known as the Memphis Boys were at the heart of the American Sound Studio at 827 Thomas Street in Memphis. What followed in that five-year period, between 1967 and 1972, was an unparalleled run of more than 120 Top 40 hits.

“We thought it was normal,” Young says, “but it was extraordinary. The talent of everybody combined contributed to the success.” Session work would take Young from Memphis to Nashville and corridors along the way at FAME Studio, Muscle Shoals Records, Stax Records, and Royal Studios. The work led to major tours around the country and Europe and as an opening act, witnessing Beatlemania. “I feel like I was in the middle of the peak of the session world as a studio player.” Of those days, he says, “It was rewarding. There was a lot of camaraderie.”

The story of Reggie Young may well be the story of Southern soul music. He was born in Caruthersville, Missouri, in 1936, and raised in Osceola, Arkansas, and Memphis, Tennessee. His father played Hawaiian guitar—old music like “Sweet Lelani,” Young recalls—and bought him a National flat top when he was 14 years old. Young was fueled by the Delta blues, as well as Django Reinhardt and B.B. King. Most of his musical education came by way of radio, inspired by the Chet Atkins and Jerry Byrd show, Two Guitars, which aired on the now famous WSM radio out of Nashville.

By 1955, Young got his first break with Eddie Bond and the Stompers, which recorded the rockabilly song, “Rockin’ Daddy.” The song charted quickly and Mercury Records signed the band to a deal. A local disc jockey promoting tours hired them to join a tour that included Carl Perkins, Johnny Cash, Johnny Horton, and Roy Orbison.

In 1959, Young was working at Royal Studios cutting records, expanding his range with saxophonist Ace Cannon, trumpeter and bandleader Willie Mitchell, and drummer Al Jackson. Young wrote several instrumentals with Mitchell, who would later produce Al Green’s most successful albums. Young recalls playing the Plantation Inn in West Memphis with B.B. King’s band. “A white guy couldn’t sit in with that band. The crowd wouldn’t go for it. So, I’d do it, but I’d be behind the curtain,” he says.

Young says, “You could sell instrumentals in those days.” He was just practicing on his old ’59 Gibson when, he says, “I tuned the guitar down two whole steps, striking the loose strings with a pencil in a rocking rhythm. The strings were heavier back then and it sounded real good when I played a shuffle beat.” It was an old jazz trick the drummer would use with his sticks on the upright bass. The record was signed and the tune “Smokie Part 2” became the number one R&B hit and rose to number 17 on the pop charts. Instrumentals would set the standard for the label for several years and Billboard voted Bill Black’s Combo the number one instrumental band from 1960 to 1962.

Young was drafted into the Army in 1960 and served for almost two years at Kagnew Station in Ethiopia. When he returned, “Smokie” was still on the charts. Fortunately, Young says, “The studio gave us a choice of paying us scale or letting us have a piece of the record. We all took a cut except for the saxophone player. He got scale—$41.25—and we made a lot of money.”

In between sessions, Young often traveled to New York City to work for Atlantic Records, adding guitar to releases by R&B greats Don Covay and Solomon Burke. Because of their success putting out smash hits, Bill Black’s Combo got an offer to be an opening act for the first American tour of The Beatles. Thirty days in the states and 30 days in Europe. It was in 1964 and “A Hard Day’s Night” was a hit.

At the time, Young says, “The union had a trade agreement with England and we were the trade band for The Beatles. In Europe, we backed up The Ronettes, who had the hit, ‘Be My Baby.’ Lulu was there, and The Kinks.” The tour yielded great music, long jam sessions, and new musical partnerships. Young became good friends with George Harrison. On the second leg of the tour, he met a 20-something Eric Clapton (then a member of the Yardbirds). “He was a blues player and I was too, so we hit it off pretty good. We learned from each other,” Young says.

In 1967, Young joined the house band of guitarist and producer Chips Moman (of Stax Records fame) as part of The Memphis Boys. at American Sound Studio. With Young on guitar and fellow Local 257 members Gene Chrisman on drums, Bobby Wood and Bobby Emmons on piano and organ, and Mike Leech and Tommy Cogbill alternating on bass, they ushered in waves of rock and roll, soul, and early R&B. In fact, it was one of the few studio bands at the time to play both pop music and R&B.

Many musical collaborations would change, seemingly overnight, when Martin Luther King was assassinated in Memphis April 4, 1968, according to Young. Big acts, like Aretha Franklin, canceled bookings at American Sound Studio and worse—although musicians had long integrated—Young felt in the aftermath, even good friends became distant.

Hi Records and American Sound Studio came to an end, and Young moved on to Nashville in 1972, where he quickly became an integral member of the Nashville studio scene, playing with J. J. Cale, Cat Stevens, George Strait of Local 433 (Austin, TX), Paul Simon of Local 802 (New York City), and Merle Haggard, among others. In 2014, Young contributed to the album, The Breeze: An Appreciation of J. J. Cale, produced by Eric Clapton and Simon Climie.

In the mid 1980s, Young hit the road with The Highway Men, which comprised Waylon Jennings, Willie Nelson of Local 433, Johnny Cash, and Kris Kristofferson of Local 257. He says, “It scared me at first to leave my main job, doing studio work. But we’d go out in fall and springtime, all over the world for five years.” Young remembers each star trying to outdo the other on stage at night. He says, “Everybody had a bus. It looked like the Ringling Bros. Circus.”

Of his distinctive sound, his wife, Jenny—a classically trained cellist and member of Local 257—says, “It’s his tone; even at 80, he has beautiful tone.” Young adds, “I was never trying to be somebody else.” Eric Clapton famously singled out Young in his autobiography as one of the best guitar players he’d ever heard.

Earlier this year, the musician who was responsible for scores of hits by other artists finally recorded his first solo record, Forever Young. In his golden years, the master of session work finally found time to record his own solos. Everyone who has heard the classic songs he made famous over a 60-year career will recognize the soulful, lyrical strains of Young’s genius.