The introduction in US Congress of H.R. 1733, the Fair Play Fair Pay Act of 2015, by Representatives Jerrold Nadler and Marsha Blackburn established a new benchmark in the protection of rights for creators whose sound recordings are performed on AM/FM terrestrial radio without a performance right. As a member of the musicFIRST Coalition, the AFM worked tirelessly with nationally recognized performance rights organizations to help ensure the introduction and passage of this legislation.

Thousands of artists, including AFM featured artists and backup musicians, will reap the benefit of this legislation, as will performers on pre-1972 recordings that were not protected under copyright. Thus far, the Fair Play Fair Pay Act has the support of such luminaries as Elton John of Local 47 (Los Angeles, CA), REM of Local 148-462 (Atlanta, GA), Chuck D., Annie Lennox, Imogen Heap, tUnE-yArDs and Sheila E. of Local 47, as well as thousands of artists and fans around the world. 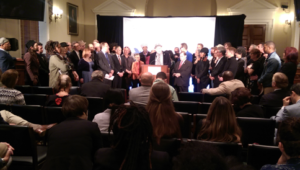 On May 11, social media was ablaze from outreach by musicFIRST and the AFM to the creative community. More than 40 artists flew in to the nation’s capital to advocate their support of this vital piece of legislation before members of Congress. The group broke into teams visiting almost 50 congressional offices. Some of the industry’s leading featured and session musicians came, including T Bone Burnett of Local 47, AFM International Executive Board member and
Local 257 (Nashville, TN) President Dave Pomeroy, Rosanne Cash and Tom Malone of Local 802 (New York City), Patrick Lamb of Local 99 (Portland, OR), Bruce Bouton and Rodney Crowell of Local 257, and Nona Hendryx. Each brought their own unique perspective representing more than 300 years of combined experience in the music industry.

After a full day of lobbying, musicFIRST presented the Americana Music Association’s annual awards nominees announcement ceremony at “The Mansion” on O Street, honoring rising recording artists from across the country.

Support of this bill is critical to our members who create new music and look forward to their product supporting their careers. We are extremely happy to have this legislation in place to help AFM members. We encourage each of our members to write their members of Congress and voice their support for this legislation and to thank those AFM members and leaders who have worked to have resolutions introduced in their local jurisdictions. As AFM President Ray Hair continues to note: “Together we are stronger.”