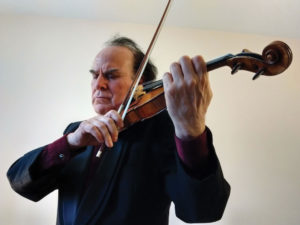 Violinist and Local 247 (Victoria, BC) member Pablo Diemecke is frequently asked to give master classes in Canada, the US, and Mexico.

Violinist Pablo Diemecke has a wide-ranging career that has taken him around the world, throughout Europe, North America, Asia, Russia, and Iceland. After two decades as concertmaster with the Victoria Symphony, he opened a private music studio, and founded his own group, the DieMahler String Ensemble.

“Since then, I have been teaching and training young performers in chamber music, in Canada and in Mexico,” says the Local 247 (Victoria, BC) member. He runs the academy in Canada, while his sister manages the family’s music academy in Mexico, both under the name Diemecke Music Academy.

Diemecke, who is affiliated with the Royal Conservatory of Toronto as a private teacher, was born into a family of classically trained musicians. His father, Emilio, was a cellist and a renowned conductor. His mother, Carmen, was a piano teacher. Together, they opened a music academy in Monterrey, Nuevo León, Mexico, during the 1960s.

“The house was always filled with music. We listened to recordings of famous violinists and orchestra music,” Diemecke says. And the number of children—eight in all—was perfect for competing quartets. “I was first violin and concertmaster of my father’s orchestra,” he remembers.

Diemecke’s father first bought a violin for his younger brother. “My father was teaching Enrique how to hold the instrument and I was watching. My father asked if I wanted to try—and that was the beginning. Once I held the violin, I knew I wanted to become a violinist,” he says. Enrique, a member of Local 542 (Flint, MI) is now conductor of the Flint Symphony Orchestra, the Bogotá Philharmonic, Politécnico Orchestra in México, and music director of the Buenos Aires Philharmonic Orchestra. His brother Augusto Diemecke of Local 380 (Binghamton, NY) is violinist and concertmaster of the Orchestra of the Southern Finger Lakes.

Other generations have also secured a place in the family’s legacy: Pablo Diemecke’s daughter, Jeanette Bernal-Singh of Local 145 (Vancouver, BC) is assistant principal violinist in the Vancouver Symphony Orchestra and his son is a violinist and violist in Australia, with the Brisbane Philharmonic Orchestra.

Success came quickly for Diemecke, who made his professional solo debut at 17 years old, and began studying under renowned violinist Henryk Szeryng at the State of Mexico Symphony Orchestra, in Toluca. He became concertmaster of the National Symphony Orchestra of Mexico at just 26 years old.

In the US, he studied with Hungarian virtuoso Robert Gerle and with Daniel H. Majeske, the celebrated concertmaster of The Cleveland Orchestra. In 1980, he became assistant concertmaster of the Washington Chamber Orchestra, and would occasionally play with the National Symphony, then under the direction of Mstislav Rostropovich.

Diemecke credits the AFM Showcase in Washington, DC, with presenting further opportunities to perform, meet other musicians, and acquire contracts.

Diemecke’s 1994 recording of the Prokofiev Violin Concerto No. 1 with the Moscow Philharmonic Orchestra was nominated for a Grammy. In 2002, he received a Gold Medal Grammy Award for his live recording of the Carlos Chavez Concerto for Violin, with the National Symphony of Mexico. He was also presented the Lira de Oro (Golden Lyre) award from the Musicians Union in Mexico.

The dynamic of living in a large musical family taught Diemecke to balance solo and ensemble performances. “A soloist has achieved the highest level in an instrument. You transmit all your emotions to the audience. In chamber music, you share the responsibility with the other instruments and musicians,” he says. To communicate that emotion, Diemecke encourages students to come into their own, drawing on his father’s advice to play from the heart.

Whether it is in Canada, an international venue, or in his hometown of Monterrey, Mexico, Diemecke makes time at least once a year to perform with his siblings. “I just played ‘Ginastera Concerto’ in January in Mexico and will be performing it again in Argentina, with the Buenos Aires Philharmonic, where Enrique is the music director,” he says. At 65 years old, he says he is playing better than ever.