Home » Products » Books-Resources » One Way Out: The Inside History of the Allman Brothers Band


One Way Out: The Inside History of the Allman Brothers Band 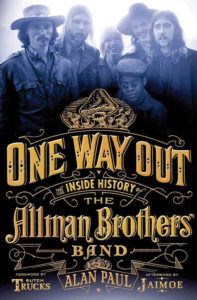 Until now, the real story of the Allman Brothers Band, written with the band’s participation, has never been told. The book’s author, journalist Alan Paul, has been covering the Allman Brothers for more than 25 years. One Way Out chronicles the journey of the band from its formation in 1969 until today, and provides musical and cultural insights and riveting road stories of personality conflicts, betrayals, murder allegations, exonerations, tragic deaths, and more. Plus, you’ll get a behind-the-scenes look at the creative insights that went into the band’s classic albums.

One Way Out: The Inside History of the Allman Brothers Band,
by Alan Paul, www.stmartins.com.

Named for a three-tiered cave system owned by the US Forest Service, this fantasy musically explores the wonders of this “living” cave. Flavored with jazz harmonies and intricate counterpoint, the piece by T.O. Sterrett of Local 802 (New York City) brings you the shimmer, wonder, and majesty of this grand work of Nature. Blanchard Caverns […]