Home » International Musician » Daryl Davis: A Life Driven by Harmony, On Stage and Off


Daryl Davis: A Life Driven by Harmony, On Stage and Off

When Daryl Davis of Local 161-710 (Washington, DC) was 15, he did what some people say you should never to do: he met his hero after sneaking backstage at a Chuck Berry concert.

Davis was always enamored with the blues and early rock ‘n’ roll icons, especially Berry. A child to two parents in the Foreign Service, he experienced the cultural lag of listening to international radio. “While my peers were growing up with Frankie Avalon and the Beach Boys, I was hearing Elvis Presley [and] Chuck Berry. I was kind of an anomaly when I would come back,” says Davis.

A self-taught guitarist and pianist, Davis copied the piano playing from Berry’s songs on the radio. He studied music in the library for hours, and sat in with local bands at gigs. When considering a career path in his junior year, Davis looked to Berry. What Davis really admired was how Berry touched people and brought them joy and happiness. “I decided that’s what I want to do,” says Davis. After his senior year, he enrolled in Howard University to study music.

Though his dream of someday playing with Berry seemed improbable, Davis began writing him letters. “I told him I was learning to play piano like Johnnie Johnson and Pinetop Perkins; I told him everything about me,” says Davis. Berry never wrote back until Davis’s 18th birthday when he got a message from Berry and a poster of the rock icon. 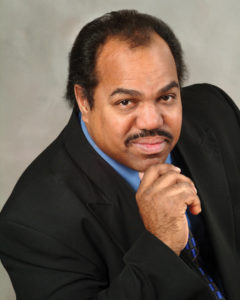 Pianist, author, and lecturer Daryl Davis of Local 161-710 (Washington, DC) has built his life around the promotion of racial and musical harmony.

Shortly after graduating from Howard, Davis joined the AFM and convinced a promoter to let him play piano and hire the backing band for a Baltimore Chuck Berry concert in 1981. At age 22, Davis achieved his dream.

“I went to his dressing room [before the show] and asked, ‘Is there anything in particular you want me to do on the piano’ and he said, ‘Well, you wrote in your letters you’ve been playing like Johnnie Johnson and Pinetop Perkins. Do that,’” recalls Davis.

From that day, Berry became a mentor and friend. Eventually, Davis acted as bandleader for Berry’s East Coast shows. “I learned a great deal, not only about music, but about life,” says Davis. “He was a shrewd businessman and I avoided some of the pitfalls that a lot of musicians fall into. He spent a lot of time with me and that’s certainly shaped who I am today.”

Thanks in part to that wisdom, Davis built an impressive career as a respected boogie-woogie and blues pianist. He has played with the biggest names in rock ‘n’ roll and blues, including B.B. King, Bo Didley, Jerry Lee Lewis, and Percy Sledge. He was heralded by mentors Johnnie Johnson and Pinetop Perkins for his ability to master a style of music popularized a generation before he was born.

Another key to his success was his union membership. “It’s benefitted me by being around other professional musicians—networking, getting legal advice, and contract advice. I’ve met a lot of wonderful people, serious musicians that I can call and rely upon,” he says. “It’s also a comfort knowing that there is a union that will fight for me and provide me things that I need to further my career.”

Davis also acts as artistic director for multiple groups across the country. When he’s not working, he mentors young musicians in the Artist in Residency (AIR) program at the Strathmore Institute in Bethesda, Maryland. The program teaches them about the business, including self-promotion, contracts, and booking agents.

Davis says it’s a way to give back. “[My mentors] could have easily said, ‘Don’t bother me; go learn somewhere else.’ But they sat down and showed me stuff,” he says, “and that inspires me to do the same thing for young musicians who are in the place I was some 55 years ago.”

To Davis, it means a great deal to the pass down the legacy of the music as well. Last year, he was asked to write and produce a play about the history of the blues to be shown to all fifth graders from Montgomery County School District in Maryland. “It’s important to learn the history of American music, and the blues is definitely underrated and under-taught, especially in elementary schools,” he says. “[Black musicians] have always been under-credited with the musical contributions we have made to this country. Almost every form of American music has some roots in blues, which was born out of slavery,” says Davis.

The history of blues and its roots in slavery are not overlooked when Davis talks about his decades-long mission to promote racial harmony, which has brought him face to face with white supremacists. It all began following a gig at an all-white country bar. A man came up to Davis and said that this was the first time he’d ever heard a black man play like Jerry Lee Lewis.

“He invited me to his table to have a drink,” Davis says, who explained to the man that the roots of Lewis’s music were black musicians. “The man said it was the first time he ever sat down and had a drink with a black man. I was naïve, so I kept asking why. He told me, ‘I’m a member of the Ku Klux Klan,’ and when I started laughing, he produced his membership card.”

This encounter sparked Davis to seek the answer to a question that had been on his mind since childhood: How could you hate me, without even knowing me? Davis figured the best way to answer that was to get face-to-face with Klansmen and ask. He has spent around 30 years studying the Klan, attending rallies, and setting up surprise meetings with Klan leaders who were unaware of his skin color.

Not every interaction was as amiable as sharing a drink. He calls to mind an incident at a courthouse where a group of Klansmen and women assaulted him before law enforcement intervened. Eventually he published the book Klan-Destine Relationships about his experiences.

However, Davis was welcomed by many Klansmen, in part through his music. He even played piano at a Klan funeral for Frank Ancona, former Imperial Wizard of the Traditionalist Knights of the Ku Klux Klan, whom he considered a friend. Davis says that 200 Klansmen have given up their robes after talking to him.

Though Davis is an in-demand lecturer on race relations, he has also faced backlash from those who believe his methods are “politically incorrect.” “People will criticize me and call me a sellout. It’s not that I support [racist] ideology. I support people’s right to speak their mind. I’m willing to sit down and listen to them and talk,” Davis says.

He believes dialogue is essential to improving modern race relations; there is no other choice. “If you and I agree racism is bad, then we don’t accomplish anything by talking to each other. We have to go out and find those that disagree with us,” he says.