by Robert Fraser, OCSM President and Member of Local 247 (Victoria, BC)

This year’s Organization of Canadian Symphony Musicians (OCSM) Conference was held in the Lord Nelson Hotel in Halifax, Nova Scotia. While taking our annual group photo, under the portrait of Admiral Nelson himself, we took the opportunity to send a photo of support to our colleagues in the Metropolitan Opera Orchestra, who were facing a difficult negotiation at that moment. It was one small step toward renewed advocacy and solidarity within our union. As OCSM approaches the 40th anniversary of its first official conference in 2016, and with Canada’s 150th anniversary following the year after, we plan to make our voices heard as we spread the message that our orchestras are vital components of our communities and our nation as a whole.

Our conference was held in between those of the Regional Orchestra Players Association (ROPA) and the International Conference of Symphony and Opera Musicians (ICSOM). As OCSM’s representative to both those gatherings, I came away with a strong sense of what effective advocacy campaigns can do. ICSOM’s chair, Bruce Ridge, and Marc Sazer, president of the Recording Musicians’ Association, gave us a primer on social media activism and how it is being used by their conferences, especially with the AFM’s Listen Up! campaign. Twitter use seems to be much lower among musicians than Facebook or other electronic tools. We are hoping to remedy that. Please follow us on Twitter @ocsm_omosc.

Barbara Richman of Strategic Arts Management gave a guest presentation on community engagement. Richman is a former executive director of Symphony Nova Scotia. She teamed up with Orchestras Canada Executive Director Katherine Carleton in a round-table discussion of what our orchestras are doing outside the usual milieu of the concert hall. Innovative community projects, educational programs, and charity work were included in this discussion.

As always, the round-table annual reports from orchestras led to discussion of specific topics. Changes to government policy around the issuing of work permits to non-Canadians is an issue that has affected many of our orchestras. Increased fees and difficulties in securing renewal of permits were just two areas that were identified. This topic will need a cooperative effort between labour and management. Orchestras in the Employment Insurance (EI) program have formed an information-sharing network to assist musicians who collect EI during nonworking periods.

We also had extensive discussion on the audition process. For many years, it has been the practice to have national auditions in Canada, where only Canadian Citizens and Permanent Residents may apply; if a suitable candidate is not found at those auditions, then a second audition is scheduled for the same position, and any musician may attend. This two-tiered system gives an advantage to Canadian musicians seeking jobs. The disadvantage is the costs  to both the orchestra and Canadian musicians. If a suitable candidate is not found at the national audition, the orchestra has to hold a second audition. Also, Canadian candidates may decide to attend both auditions. Again, this topic requires more careful consideration. There is a lack of readily available data on what percentage of auditions go to the international phase.

Canadian orchestras are not party to the AFM Integrated Media Agreement (IMA); we still use a small number of AFM agreements for recording. At this year’s conference, however, our Electronic Media Committee prepared a set of guidelines offering reasonable rates and conditions for audio-only or audio-video streaming. The rates are based on the current CBC hourly work-time and reuse rates. They will be put to use by orchestras who increasingly rely on audio-visual material in promotional activities.

In OCSM elections: Matt Heller of Calgary Philharmonic and Local 547 (Calgary, AB) has returned to the board as first vice president. Faith Scholfield and Greg Sheldon of Windsor Symphony and Local 566 (Windsor, ON) were re-elected for two-year terms as secretary and treasurer, respectively. Robert Fraser of Victoria Symphony and Local 247 (Victoria, BC) and Elizabeth Johnston of Canadian Opera Company Orchestra and Local 149 (Toronto, ON) enter the second year of two-year terms as president and second vice-president, respectively. 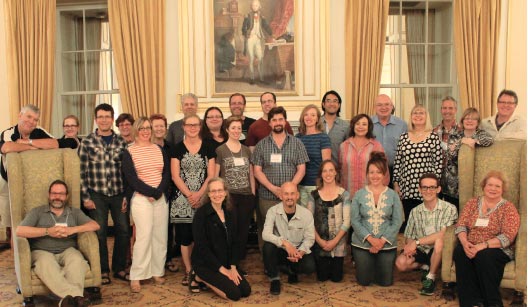 OCSM delegates and guests pose for a photo under the portrait of Admiral Nelson at the Lord Nelson Hotel in Halifax, Nova Scotia.