Home » On the Cover » Nurit Bar-Josef: Behind the Scenes with the National Symphony Orchestra Concertmaster


Nurit Bar-Josef: Behind the Scenes with the National Symphony Orchestra Concertmaster 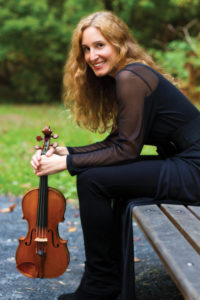 When Nurit Bar-Josef of Local 161-710 (Washington, DC) was selected as concertmaster for National Symphony Orchestra (NSO) at age 26, she was the youngest concertmaster ever appointed to a major symphony orchestra. More than 16 years later, she recalls initial surprise on finding out she’d won the spot.

“I knew some of the others who had auditioned—it’s a small world—and I thought they might think I was too young or too inexperienced,” she says.

The young musician was aware of the huge responsibility she had accepted. “I knew what to expect from my previous experiences in St. Louis and Boston, where I saw just how much the concertmaster has to deal with on a daily basis,” she says. Bar-Josef was assistant concertmaster for Boston Symphony Orchestra and Boston Pops when she auditioned with NSO.

“It’s constant pressure; when you are sitting in that chair, you are expected to always be on—it’s 120%, all the time. I feel like I represent the orchestra and there are times when the whole orchestra is looking to me for guidance,” she says. “That’s the biggest challenge; no matter what is going on at home, or what’s going on around you, or on the podium, you are out there for your colleagues.”

Meticulous preparation is key, she says. “Knowing the score well, in and out, and knowing everything that’s going on. You have to have that first violin part down like no one else,” she says. “And because you are number one, you have to always play the solos and play them well. I try to do my best every single time.”

“It’s a good lesson in time management because there is so much music coming out, week after week,” says Bar-Josef. “It forces me to prioritize and manage my practice, even when I have limited time. I have to figure out what I need to do now and what can wait.”

Above all, she has a passion and dedication to the current repertoire, whatever it may be. “Every week, whatever we are playing, I throw myself into it. That’s what we live and breathe for that week. Oftentimes, I feel like we are actors given a role to play,” says Bar-Josef. “If we play a Shostakovich symphony, he becomes my favorite composer that week. If we are playing Brahms, I am all about Brahms, emotionally and physically.”

For pleasure, she says, “I always, always enjoy playing a Beethoven symphony or even a Beethoven violin sonata. I wouldn’t say that he’s my favorite composer, but I would say anytime I’m playing Beethoven I’m musically and technically fulfilled,” she says.

Like all principal string players, Bar-Josef spends time marking bowings. “The other principals are waiting to get my part in order to mark their bowings to match mine, and I’ve got the library waiting for all of that to happen. That’s added pressure,” she says. “Part of the process is making sure my colleagues have the music well enough in advance to feel comfortable.” 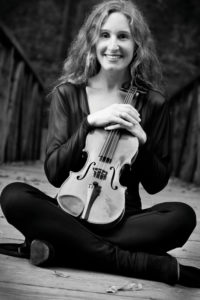 Bar-Josef has the honor of meeting guest conductors and acts as a liaison to the rest of the players. She ensures a smooth working relationship between members of the orchestra and the conductor. This, she says, “is an incredibly rewarding responsibility.”

“I learn a lot from working with conductors,” she says, explaining that many of them request a one-on-one meeting before the concert, especially if she will perform a solo. “Every musician who comes to visit is different. It’s really important to me that I represent the orchestra well. No matter what is going on, I try to connect with the person on the podium.”

“Conductors travel the world and they conduct all different orchestras, from the top notch to smaller groups in smaller towns,” she continues. “I want them to feel like the NSO is an all-around good experience. As concertmaster, I am part of that—making that connection with the person. It’s a short period of time and it can be really intense for those few days.”

Though Bar-Josef relishes the challenge of these responsibilities, she admits her role can be isolating, sometimes setting her apart from her colleagues. The time requirements mean she has less time for socializing, particularly when they are out on tour. “When we go on tour, I’m constantly thinking about what we are playing tomorrow, what we are playing tonight, and how much time I have to prepare. I don’t have a whole lot of time to hang out and have fun in some new city.”

Though she is passionate about playing solos, Bar-Josef admits, “It’s one of the hardest things I do. It’s very rewarding that I get to play amazing solos like Scheherazade, though it’s stressful. There’s a lot of pressure playing solos with some of the greatest conductors standing one foot away from me.”

Bar-Josef is currently one of an estimated 25 women concertmasters in the US and Canada. While there have been some remarkable women in this leadership role over the years—for example, Cecylia Arzewski (Atlanta Symphony Orchestra 1990-2008) and Emmanuelle Boisvert (Detroit Symphony Orchestra for 23 years)—their numbers are still far below the current ratio of women to men in orchestras. Bar-Josef feels like more women will likely take the leadership role in the future.

Of course, blind auditions help to ensure the best candidates, male or female are selected fairly. And fortunately today, unlike just a couple decades ago, female orchestra musicians enjoy equal treatment. “I have never felt that anyone looked at me as a female or thought they’d rather have a man in my position; I never once felt that a guest conductor was disappointed by having a female concertmaster,” says Bar-Josef. “Today, I feel it’s all about the music and what type of musician you are—gender doesn’t matter.”

The Joy of Chamber Music

When Bar-Josef has a chance, she looks forward to performing in smaller chamber groups. “I always love playing chamber music,” she says. “I enjoy the camaraderie and the intimacy of it—sitting in a group close together, having my sound blend with theirs and not having to worry about leading a section. I can be much more free in a chamber group.”

A founding member of Kennedy Center Chamber Players, she performed with them for nine years. “It’s basically a core group that started out as the principals of the National Symphony—Principal Viola Daniel Foster, Principal Cello David Hardy, and Principal Keyboard Lambert Orkis. We would ask other people from the orchestra, both titled and nontitled players, to join us for four chamber music concerts a year at the Kennedy Center Terrace Theater.”

The other group she’s been involved with for a long time, the Dryden String Quartet, came together less formally about 16 years ago. “When I first moved to DC, I didn’t have any family here. I had to play over Thanksgiving so I was stuck in town,” she recalls. “Daniel Foster asked me if I wanted to go to his family’s house for Thanksgiving and he said, ‘Bring your violin, we might do some sight reading.’ He’s cousins with [Time for Three] violinist Nicholas Kendall and [Philadelphia Orchestra Assistant Principal Cello] Yumi Kendall. It ended up being a pretty good group.”

The group named itself after John Dryden Kendall, grandfather to Foster and the Kendalls,  who brought the Suzuki method to the US. “The first concert we played was at an embassy event in honor of their grandfather,” says Bar-Josef. “Unfortunately, everybody is just so busy in their own lives it’s difficult to find time. We try to get together at least once a year, sometimes twice if we are lucky.”

Every now and then Bar-Josef finds time to perform in other chamber groups. “I like to do outreach with different NSO players and Millennium Stage performances at the Kennedy Center, house concerts, or whatever pops up,” she says.

This season Bar-Josef looks forward to working with incoming NSO Music Director Gianandrea Noseda. “I am excited that we have so many great programs coming up with him,” she says. In particular, she looks forward to playing Chausson’s Poème in November. “It’s just such an honor and a privilege. I’ve always wanted to perform that piece and what better opportunity than with the NSO and Noseda conducting.”