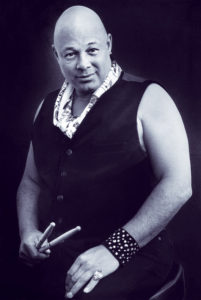 Drummer, producer, songwriter Narada Michael Walden of Local 6 (San Francisco, CA) has written hits for some of the biggest names in the industry.

Narada Michael Walden of Local 6 (San Francisco, CA) was just 21 when he was discovered by the avant-garde guitarist John McLaughlin and joined the Mahavishnu Orchestra. Taking over for the illustrious drummer Billy Cobham was a pivotal moment in Walden’s career. The experience defined his life on many levels, from visionary, genre-blending new music to the spiritual quest it would take him on. McLaughlin introduced Walden to a guru, Sri Chinmoy, who gave him the name Narada and who taught him not to judge himself too harshly. “The only person you need to compete with is yourself. Be the best you,” advised Chinmoy.

At 64 years old the top-flight producer, songwriter, and musician, who has produced 57 number one hit songs, and received three Grammys, and an Emmy, is still humbled by life. His joie de vivre is compelling as he talks about success and contentment. “Did you have a good time?! Did you accomplish what you wanted to? I played with John McLaughlin, Jeff Beck, Carlos Santana [of Local 6 (San Francisco, CA)], Aretha Franklin, and Stevie Wonder [of Local 5 (Detroit, MI)]. I had fun, I had children—all the things we’re here to do,” he remarks.

Walden calls Evolution, his 16th album with the Narada Michael Walden Band, “a celebration of delight.” On it, he revels in late-in-life fatherhood and pays homage to musicians who have inspired him. “I’m calling out their names,” he says, “A lot of high-spirited dancers came out. Curtis Mayfield touched my heart. Rick James’ spirit, just crooning, came out. Rock blues came out. Bob Marley, Jimi Hendrix, and Jeff Beck all came out. The 1978 dance music came back around again.” The album includes two covers: “Freedom” by Richie Havens and “The Long and Winding Road” by John Lennon and Paul McCartney.

Growing up in the 1950s, between Detroit and Chicago, Walden listened to everything. “Even before Motown, we had beautiful music. There was Curtis Mayfield, Johnny Mathis, Patti Page, Jimmy Smith, and Dave Brubeck. Anything that was cool, even country, like Patsy Cline—we loved,” he says. Heavily influenced by Ray Charles, as a kid he carried around his live album What’d I Say. “Every song was so deep. Groove, all the while his feet beating under the piano. So much command, control, and discipline,” he says.

Walden’s debut album back in 1976, Garden of Love Light, featured tracks representative of his experience with the Mahavishnu Orchestra. But Atlantic Records was looking for commercial hits so Walden’s follow-up work moved toward the dance-pop and soul music for which he’s become most famous. He says his hit from that album, “I Don’t Want Nobody Else (to Dance with You)” saved his career. As a producer and songwriter, he’s collaborated with musicians across the charts, notably Stevie Wonder, Stanley Jordan of Local 802 (New York City), Whitney Houston, Steve Winwood, and Mariah Carey, while scoring many hits of his own. With Jeff Beck he wrote and played drums on the seminal album, Wired, earning each a Gold Album.

Walden makes his home in the studio, but still loves live venues. On occasion, he plays with his old friends, like Aretha Franklin. Recently, in New York City, for the first time they performed the hit he co-wrote and produced for her, “Freeway of Love.” Walden expresses awe for that generation of singers, especially from the gospel tradition. “It’s a power that’s ordained, almost transcendental,” he says.

He describes Tarpan Studios as a nesting ground for developing talent. Part of his genius as a producer is freeing up the artist so he can capture the emotion. Walden creates ambiance, the perfect lighting, the vibe, getting to what he refers to as the deep heart space to touch the emotion. He says, “The timing, how it feels, the tuning, how it goes down—the emotion is critical. A few great singers absolutely love the sound of their voices. And that’s what makes it easier for me as a producer. They just love the sound that comes out of the speaker.”

In the ’60s, ’70s, even into the ’90s, music had air, making space for artistry. “These days, it’s got to be mastered to the point where it’s super powerful, which often takes air out of the music. Going fast,  intense and big sounding.” Walden remembers what Quincy Jones of Local 47 (Los Angeles, CA) taught him long ago: “If it’s number one it’s number one for a reason”—which these days means keeping up with cultural shifts, being competitive in the industry, all the while preserving an art form.

A longtime session musician, Walden is a strong advocate for musicians’ rights. He regularly contracts union musicians. “We want to make sure we protect ourselves and artists and songwriters get paid,”  he says, noting the solidarity and order the union brings to the industry to keep musicians in business.

Through his own foundation, he’s broadened his advocacy work. The Narada Michael Walden Foundation fosters music education for children by providing instruments for private lessons and music programs and camps. In addition to Christmas shows and jams throughout the year, he invites students into the studio for sessions on recording and writing, where they participate in singing or drumming classes. For many of the events, Walden calls on high-profile friends, like Sting, Dionne Warwick, and Martha Reeves to work with kids. “It’s a confidence builder. We both win.”

In a life that’s come full circle, with Evolution, with his family, and the foundation, Walden has found his center. Invoking the guru, he tells students, “Be the best you.”