I’ve been hearing about the January National Association of Music Merchants (NAMM) Show for years. Many of the NAMM Show exhibitors advertise in our monthly International Musician (IM) so this year’s show seemed the perfect opportunity to thank our advertisers in-person and talk to other vendors who could become potential IM advertisers. Since the IM is received by all of our 80,000 AFM members in the US, Canada, and Puerto Rico, vendors who advertise in our official monthly journal are able to reach a very special segment of the market—working musicians who make their living making music. 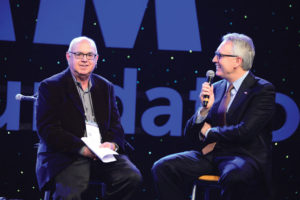 I’m sure many of you may have attended the NAMM Show in the past, but for a first-timer like me, it was a real eye-opener. More than 2,000 exhibitors (merchants), from large, well-established companies to small start-ups looking to break into a very competitive marketplace, can be found. In fact, the show has become so popular, it has outgrown the existing space—the Anaheim Convention Center, plus the nearby Marriott and Hilton hotels, which are used to host many show events and forums. I’ve been told that new construction at the Convention Center will expand available exhibit space by 50%!

The show attracts more than 100,000 attendees (stars, professional and amateur musicians). Everyone seamlessly mingles together trying out new products and getting their technical questions answered by industry experts. At lunch one afternoon, I noticed Stevie Wonder, a member of Local 5 (Detroit, MI), sitting at the table next to ours. It all seemed so natural.

There were many forums available for show registrants on a wide variety of topics. In fact, I was invited to participate as a panelist in the Sandy Feldstein Industry Roundtable discussion, which was sponsored by the State University of New York at Potsdam, Crane School of Music, and presented by the NAMM Foundation. Sandy Feldstein (for whom the roundtable discussion is named) was a percussionist, educator, composer/arranger, publishing executive, and for those of us who knew him, a bon vivant and raconteur who touched the lives of countless musicians around the world. In whatever capacity Sandy served, he always found new and creative ways to educate musicians. Unfortunately, Sandy died young in 2007, at age 66. 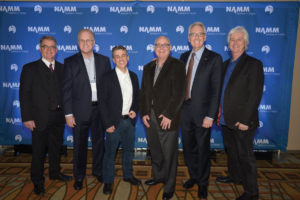 The roundtable discussion was moderated by NAMM President and CEO Joe Lamond and included Joe Testa, director of artist relations at Vic Firth; Michael Doyle, senior vice president of guitar merchandising for Guitar Center, Inc.; Katie Larson and Savannah Buist of The Accidentals (one of Billboard’s breakout bands at SXSW 2015), and me. The audience, composed mostly of young, aspiring musicians embarking on their careers, came for guidance about how one becomes successful in the very competitive music business. This topic was particularly appropriate for the discussion because Sandy Feldstein devoted so much of his life educating and mentoring college age musicians just beginning their careers.

Over the years, NAMM has maintained a deep commitment to music education and is a strong advocate for music in schools, which is a subject very dear to the hearts of AFM membership. If you care to learn more, go to www.namm.org.

I want to thank Bob Popyk, Cherie Yurco, Dan Walding, and Karen Godgart at Bentley-Hall, Inc., who helped make my attendance at the NAMM Show possible; Joe Lamond for his warm welcome to the show; and SUNY Potsdam Distinguished Teaching Professor Jim Petercsak for his gracious invitation to participate as a panelist for the roundtable discussion.

If you have not had an opportunity to attend the NAMM Show, I heartily recommend it.

Federation Agreements Provide Stability in a World of Pandemic Unpredictability

As I compose this month’s column, I’ve received notice from the American Arbitration Association (AAA) that musicians employed under the Federation’s Motion Picture Film and Television Film Agreements have ratified a one-year extension to those agreements, extending all provisions of the existing agreements together with a 3% increase in wages. That extension preserves and protects […]

As the ball has dropped in Times Square ushering in the 2022 New Year, the hope is that this year will bring improved work situations for all AFM members. Last year brought the reopening of some theaters and music venues, but the return to full employment has been elusive. While we all want to get […]