On December 15 more than 50 AFM Local 47 (Los Angeles, CA) members, workers from several other unions, and other supporters demonstrated against “the exploitation of musicians” outside of Warner Bros. The group distributed leaflets objecting to the studio’s facilitation of nonunion activity on its property by permitting a nonunion “dark” date by Cinema Scoring, an employer with whom AFM Local 47 has a labor dispute. 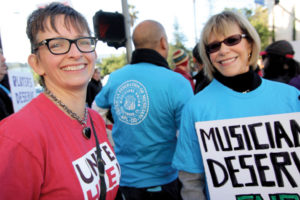 Members of AFM Local 47 (Los Angeles, CA) and other supporting unions such as UNITE HERE!, demonstrated and leafleted in front of Warner Bros. in December, after discovering evidence of a November “dark” scoring session.

In June, at the request of the union, the Los Angeles County Federation of Labor had authorized strike sanction against three music employers—Cinema Scoring, Collective Media Guild, and Peter Rotter Music Services—based on their actual and/or potential engagement of musicians in nonunion recording sessions. The strike sanction calls for all AFL-CIO-affiliated labor unions to stand in solidarity with AFM Local 47 and not cross the picket line, if and when these employers call a nonunion engagement. This is the first time the musicians union has taken this unique approach of invoking the collective power of the labor community.

“By allowing substandard working conditions on your scoring stages, it undermines the future careers of the next generation of professional musicians,” Nazarian wrote. “Further, it negatively impacts entire communities by devaluating the livelihoods of musicians who contribute to the economic and educational well-being of our neighborhood.”

“Warner Bros. should not be in the business of creating a safe haven for employers who exploit musicians,” says AFM Local 47 President John Acosta. “The support our fellow union sisters and brothers showed out there with us is a testament to the power of solidarity. We all need to stand together against the unfair treatment of workers, wherever it takes place.”