After more than a month of unsuccessful attempts to reach Lionsgate Entertainment CEO Jon Feltheimer through letters and phone calls, it was time to pay him a visit. Rank-and-file musicians wanted to discuss Lionsgate’s practice of offshoring its musical scoring to distant countries—something that limits local musicians’ ability to earn a living and deprives our communities of tax revenue.

On May 13, union members and supporters of the American Federation of Musicians’ Listen Up! campaign—professional musicians, labor allies, and faith and community leaders—gathered in Santa Monica’s Stewart Street Park for a rally. The spirited event included AFM Local 47’s executive board and a supportive crowd of musicians representing members from across our union. We were joined in song by our fellow AFM Local 47 members and Grammy-nominees Lisa Haley and the Zydakats. We heard moving speeches from Santa Monica City Council member Kevin McKeown and other friends, ending with an inspirational call to action by violinist and Local 47 member Neil Samples.

Then it was time to introduce ourselves to Lionsgate’s boss. 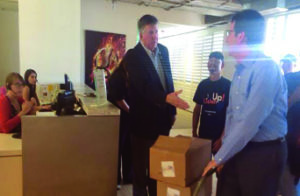 Our delegation was led by musicians who make their livings in theater pits, concert stages, clubs, and recording studios. We were joined by Maria Elena Durazo, secretary-treasurer of the L.A. County Federation of Labor, and Council member McKeown. They and Pastor Bridie Roberts, of Clergy and Laity United for Economic Justice, helped us carry more than 12,000 petition signatures from communities across the US that are part of a growing chorus of support for our cause.

We rolled into Lionsgate’s Colorado Avenue offices with a handcart stacked with boxes filled with petitions that urged the film-and-TV company to merely enter into discussions with musicians about ending Lionsgate’s offshoring practices—most recently seen in the scoring for the film Draft Day. Once inside, we respectfully requested the receptionist to announce that Listen Up! was here to deliver its petitions and to speak with CEO Jon Feltheimer.

Instead, Jim Gladstone, Lionsgate’s executive vice president for business and legal affairs, came into the reception area and brusquely collected our petition boxes in a manner that attempted to avoid any engagement with musicians. Council member McKeown politely introduced himself and explained that he had requested a meeting more than five weeks ago, but had not been given any response. Gladstone withdrew to his office on an upper floor with the petitions, agreeing to deliver them to the CEO—but refusing to talk to the delegation.

Eventually, another Lionsgate employee invited us into a conference room because he personally felt that it was right to hear our concerns. He was clear with us, however, that he had absolutely no authority to speak on behalf of the company. We wished Lionsgate continued success, then raised our concerns about offshoring musical scoring. McKeown reiterated his attempt to reach out to Lionsgate, its failure to respond, and his disappointment that a company based in his own city, Santa Monica, would not answer his questions. Maria Elena Durazo asked very clearly for Lionsgate to respond to musicians and to end offshoring its music scoring. Pastor Roberts made it clear that Lionsgate’s refusal to meet with musicians was disrespectful and that the community would be insulted by a continued curt and dismissive response by Lionsgate’s leadership. Musicians spoke about their desire to enter into a dialogue, and about the damage offshoring inflicts on our health care, pensions, and livelihoods—as well as on the cultural richness of the Southern California region. 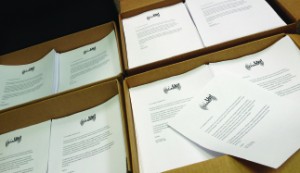 We ended as we began, with respect, graciousness, and strength. Pastor Roberts led our group in prayer inviting the Lionsgate employee to join us in the reception area, calling for his company to respect musicians and to work for justice in our community.

When we returned to our allies rallying in the park, we felt empowered and proud to report on the success of our determined delegation and shared our sense of power and optimism in taking musicians’ issues directly to the attention of Lionsgate and our broader community.

As our Listen Up! campaign grows and deepens, and we work toward real success, you can support our goal in some very easy ways: