Effective January 1, 2016, members who belonged to three or more Locals throughout 2015 can petition the AFM Secretary-Treasurer for a “rebate equal to the per capita dues received by the Federation” for that member’s membership in each AFM Local in excess of two. (Members pay their Federation per capita dues as a portion of their Local annual dues. The Local forwards the member’s per capita dues to the Federation. Only the Federation’s portion of the annual dues will be rebated).
According to Article 9, Section 16 of the AFM Bylaws, the rebate is only available to members who held simultaneous memberships in three or more Locals for the full calendar year. No rebates are available to members who held membership in fewer than three Locals. The rebate will only be given for membership in the third Local (and each additional Local above three, if any). Members will not be given rebates for dual membership.
Under the rebate program, membership in a base of two Locals must be established in order for a member to qualify for a rebate. The AFM Secretary-Treasurer’s Office has determined that a musician’s membership in his or her “home Local” and the subsequent Local of longest tenure shall be designated as the two base Locals. The Secretary-Treasurer’s Office will then rebate the appropriate per capita dues for membership in the third Local and any other Local(s) beyond three to which a member belonged for the entire 2015 calendar year. The amount rebated will be determined by the amount of per capita dues the member paid for AFM membership in a third Local and any other Locals beyond three.
To petition for a Multi-Card Member Rebate, members should fill out the form below and return it to the AFM Secretary-Treasurer’s Office together with copies of all their paid-up 2015 membership cards, receipts of cancelled checks for annual dues from all Locals, OR a letter from each Local stating that the petitioner was a member in good standing of the Local for all of 2015.
No rebates will be issued until the AFM Secretary-Treasurer’s Office verifies that petitioning members held continuous membership in three or more Locals for the full prior year of 2015. No rebates will be issued until after March 1, 2016. 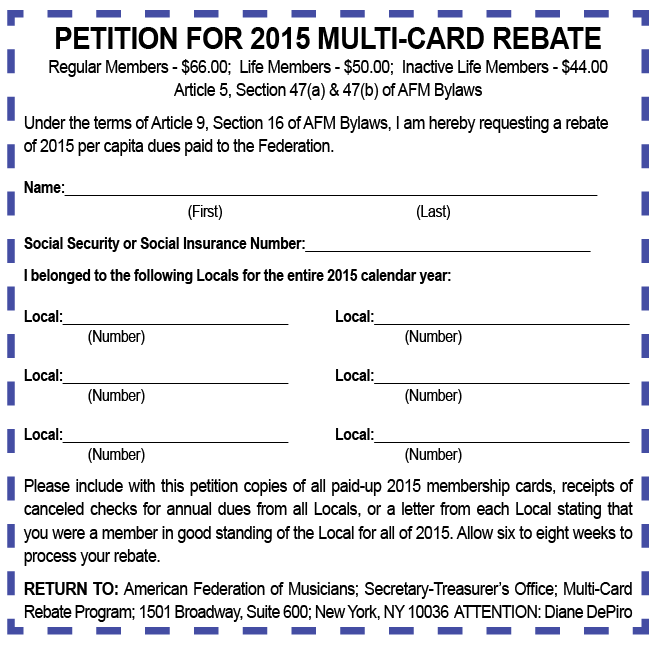