With the CBC already reeling from the loss of Hockey Night in Canada to communications giant Rogers, the Harper government finishes the job with devastating cuts to our national broadcaster. This latest faux pas, which trims $130 million, translates into the loss of 657 jobs. Some of those positions are music producers. These losses will cripple the CBC’s ability to deliver high-quality musical variety and broadcast remotes.

Canada’s Broadcasting Act contains a clear mandate for the CBC:

3. (1) l) the Canadian Broadcasting Corporation, as the national public broadcaster, should provide radio and television services incorporating a wide range of programming that informs, enlightens, and entertains;

m) the programming provided by the Corporation should

(ii) reflect Canada and its regions to national and regional audiences, while serving the special needs of those regions,

(iii)actively contribute to the flow and exchange of cultural expression,

(v)strive to be of equivalent quality in English and in French,

(vii)be made available throughout Canada by the most appropriate and efficient means and as resources become available for the purpose, and

(viii) reflect the multicultural and multiracial nature of Canada;

Accompanying those lofty expectations are limited sources
of income.

Meanwhile, the CBC has a substantial positive impact on the economy that’s well above its spending power. According to a study done by Deloitte, the measureable benefits identified were:

•For every dollar CBC receives from Canadians, it generates almost $4 for the Canadian economy.

•Its regional and local activities contribute to local economies and creative clusters in many Canadian cities.

•It creates depth in the production sector by commissioning a wide range of genres.

•It implements new technologies, which are later adopted by other broadcasters and the wider creative sector.

Government support of Canada’s public broadcaster is one of the lowest in the world, per capita, as demonstrated by the following graph. 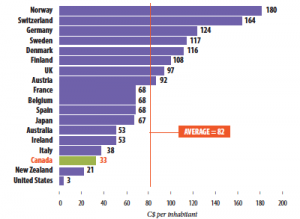 From this graph, we can see that the BBC is provided three times the funding of the CBC. Norway’s public broadcasting receives almost nine times that amount. Given that the CBC is required to produce programming in two official languages, along with more than 20 other indigenous, foreign, and various dialects across the second largest country (geographically) in the world, the expectation versus support received is out of balance in the extreme.

From the CFM’s perspective, proper funding of the broadcaster is essential if we want emerging Canadian musicians to find an audience. In addition, the amount of CBC-produced or commissioned programming containing a score recorded by CFM musicians will continue to erode, unless funding improves or CBC President Hubert Lacroix commits more of the available budget to the arts.

In other developments, Local 406 (Montreal, PQ) has pulled the trigger on a referendum to disaffiliate from the AFM. It was announced April 11 that the balloting would take place the week of June 2. This is a most regrettable decision, and we urge members to keep up to date on further news by visiting www.CFMisMYunion.ca.

As I write this, Canadian locals have just attended a presentation by Lisa Freeman, executive director of the Canadian Private Copying Collective (CPCC). My sincere appreciation goes out to Freeman, who took the time to apprise those in attendance on the status and short-term objectives her team faces in anticipation of pending updates to Canada’s […]

Paying the Price for Union Strength

At the risk of being repetitive, I must lament at hearing nonmember musicians (and a disturbing number of members) parroting the corporate slogan: “perhaps there once was a need for unions, but not anymore.” Nothing could be further from the truth. Giving any credence to that statement is a recipe for disaster. Corporations, or any […]