Meet the Staff of the AFM’s Touring, Theatre, Booking and Immigration Division

If you’ve ever had questions about traveling engagements, touring with a show or artist, or questions about foreign ensembles performing in the US, chances are you have contacted the AFM’s Touring/Theatre/Booking and Immigration Division.

This past year the division said farewell to former Director Steve Gelfand and welcomed Michael Manley, who returns to the post after an eight-year hiatus. He’s joined by Contract Administrator George Fiddler and Visa Consultation Specialist Elizabeth Blake, who round out the busy staff of three. 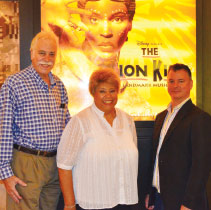 When Elizabeth Blake began working at the AFM in 1965, she had to route phone calls at an actual switchboard, and type letters on a manual Underwood typewriter. “Mad Men” were actual men, and could be seen pounding the pavement in front of the AFM’s New York City offices, then located at Lexington Avenue and 54th street. Herman D. Kenin was the AFM President, and former President James Petrillo would pay the occasional visit to staff. Blake has worn many hats at the AFM in her 40-plus years here, and is currently the resident ambassador for foreign artists seeking consultation opinion letters from the AFM. These consultation letters are required for foreign musicians seeking to perform engagements in the US, so the role the AFM plays in verifying their authenticity is key. It’s fitting that, in her time off, Blake enjoys cruise ship travel to exotic locales.

George Fiddler, who assists in the high-volume of visa consultation processing, also provides vital contract administration guidance to a varied community of touring musicians working under AFM agreements. From the circus tent to the theatre pit and concert stage, Fiddler deals with a multitude of touring issues, from the typical (“How is travel overtime calculated?”) to the utterly unique (“What should I get paid for walking the elephants as a side gig?”). Fiddler came to the AFM in 2008, after several seasons as an assistant house contractor for Radio City’s Christmas Spectacular, and brings a wealth of experience and understanding from his days as a club date trumpet player. When not at 1501 Broadway, Fiddler enjoys golfing and travel, and can still be heard lending his trumpet talents to professional and community groups in Brooklyn. His favorite on-the-job assignment is visiting Ringling Circus musicians during their annual stint at Madison Square Garden.

Michael Manley returned as director this year, after a brief stint with the AFM’s Electronic Media Services Division in Los Angeles. He enjoys assisting local officers and the AFM International Executive Board (IEB) with theatre and booking matters, as well as building community and labor empowerment among professional touring musicians. He is the “face” of the Touring/Theatre/Booking and Immigration Division in the larger performing arts labor community.

Prior to his return to the AFM, Manley could be heard in the pit of Disney’s Lion King Las Vegas, which enjoyed a nearly three-year run at the Mandalay Bay resort. During his time in Las Vegas, Michael helped found the Las Vegas chapter of the Theatre Musicians Association, and also served on the Local 369 (Las Vegas, NV) board of trustees. Manley first came to the AFM in 2000, after several years touring the US and Canada with The New York City Opera National Company, and the national companies of Les Miserables and Miss Saigon.

When not working with the AFM or playing horn, Manley enjoys creative writing. He’s most proud of his collaboration with composer and co-author Angela Chan of Local 369, on Legacy of the Tiger Mother—the only musical set during a piano recital.