Home » Recent News » A Meditation for Nobodies and Old Mares


A Meditation for Nobodies and Old Mares 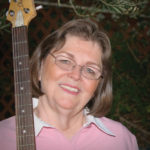